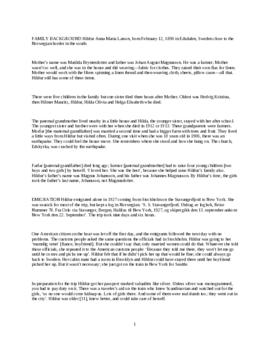 Hildur Anna Maria Johansson was born in Edsdalen, Sweden on February 12, 1896. Hildur was one of five children born to her parents, Johan August Magnusson and Matilda Bryntesdotter. Hildur's father was a farmer, and her mother stayed home and wove. Hildur worked in a hospital in Stockholm for two years and thought about training to become a nurse; however, she was too young to start training. Around 1922, Hildur met her future husband in Norway while she was working with her aunt. After he had attended business school and had not found a job, he left for America. Hildur decided to follow him and left for the United States by herself on September 13, 1927. She departed reluctantly, but happily the two of them were married within 24 hours of her arrival. They lived in Hoquiam, Washington while Hildur's husband worked at the sawmill. In 1930, they had their first child named Judith. When a bad flood hit Hoquiam in 1933, the family moved to Tacoma. Hildur's husband became an American citizen around 1941, but Hildur never wanted to become a citizen. Part of her wanted to return to Scandinavia, but when her children began school, she realized she needed to stay in America. For a long time Hildur delayed learning English; Hildur and her husband mostly spoke Norwegian in their home. The two of them became editors of the Western Viking in which Hildur published poems in both Swedish and English. She and her husband belonged to the Sons of Norway, and Hildur was a member of the Ladies Aid in the church-Emmanuel Lutheran. Hildur never returned to Sweden, but her son Edgar did. Hildur still decorates and cooks for Christmas in the Swedish tradition. She enjoys writing poetry and has passed that love on to her family members.