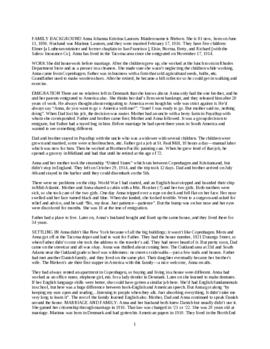 Anna Johanna Kristina Laursen was born on June 11, 1896 in Copenhagen, Denmark. When her father lost his job, he decided to immigrate to America with his wife and two children. Anna's father and brother went first and were soon followed by Anna and her mother. They settled in Tacoma, WA near Anna's mother's uncle who owned a berry farm in Puyallup, WA. Anna's father bought a house in the Oakland area near 33rd and South Adams. Anna was eighteen at the time and thrilled to be in America. Anna met her husband, Marinus Laursen, at a Danish church and was married when she was twenty. Marinus was also born in Denmark and had obtained his American citizenship in 1910. Anna and Marinus had five children: Elmer, Elsie, Norma, Betty, and Richard. After Richard was seven or eight, Anna opened a variety store with a neighbor and later went on to work in a cleaning shop when Richard was twelve. Anna and Marinus were very active in the community. Marinus belonged to the Danish Brotherhood and Anna to the Sisterhood. These organizations gave them many social opportunities including cards, dances, and meetings. Anna was also involved in a Danish church, the Oakland Church, and the PTA. Anna and Marinus subscribed to Danish newspapers for many years, but Anna never insisted that the children learn Danish as well. She believed their American schoolwork was the first priority. Anna and Marinus lived in Tacoma for sixty-two years.