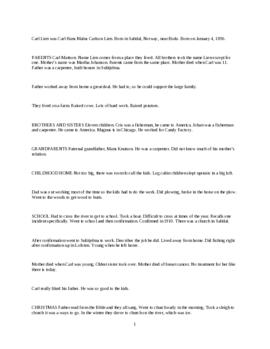 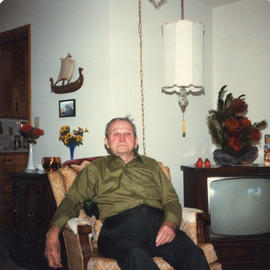 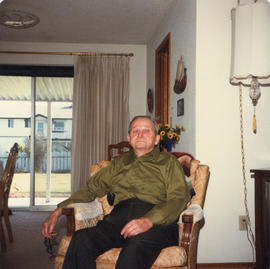 The interview was conducted with Carl Lien on March 16, 1982 in Tacoma, Washington. This interview contains information on family history, childhood home, school, work in Norway, Christmas traditions, meeting spouse and marriage, emigration, work in the Midwest, move to the West Coast, work in Washington State, fishing in Alaska, language difficulties, citizenship, church, Scandinavian organizations, trips to Norway, changes in Norway, and maintenance of Norwegian traditions. The interview also provides two photographs of Carl Lien at the time of the interview.

Carl Hans Malus Carlson Lien was born on January 4, 1896 in Lien, Saltdal, Norway, which is near Bodø. He was one of eleven children by Carl Mattsen and Martha Johansen; Carl Sr. was a carpenter and built houses in Sulitjelma, and Martha died when Carl Jr. was eleven years old. Carl went to school and was confirmed in 1910; right after confirmation, he fished in Lofoten and then worked in Sulitjelma from 1913 to 1923. He met his wife, Tora Johanson, at a dance in Sulitjelma; she was working in a motel in Sulitjelma at the time. They dated for five years and married on December 14, 1919 in Skjerstad, Tora's hometown; their daughter, Carlene, was born on April 15, 1920. Carl had three brothers living in Superior, WI, and he left Norway aboard the Bergensfjord on Easter Day 1923; he entered the U.S. at Ellis Island. He lived in Superior with his brother until his wife and daughter emigrated one and half years later and then bought a house close to his brother. Carl worked for Morton Salt in Superior for five years and worked on the ore docks for five years; he also helped his brother with carpentry work in Chicago for three to four months and did longshoring on Lake Superior. He moved to the West Coast in 1945 and worked for Buffelen on the flats in Tacoma, WA and at a cannery in Seattle. He worked on a fishing boat in Anchorage, AK and returned to Wisconsin for three months before working as a school groundskeeper for Julius Tollefson. He and Julius were laid off, and they went to Elma, WA to work on the construction of a new plywood plant. Carl's wife came to Washington in 1948, and Carlene married a Polish man in Michigan. Carl moved to Tacoma in 1964 and commuted to work in Elma until he retired in 1967 at age 71, after working for the plywood plant for sixteen years. He became a citizen in 1935 and belongs to Sons of Norway, Nordlandslaget, and St. Mark's Church in Tacoma. He visited Norway in 1968.