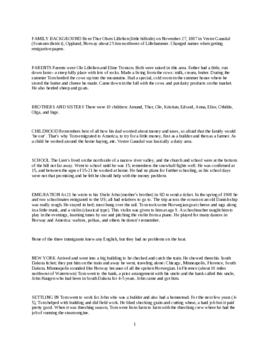 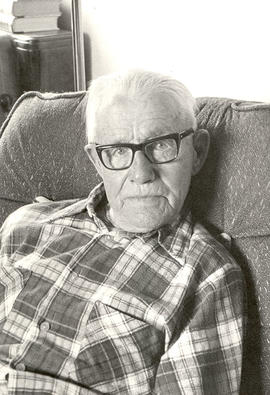 The interview was conducted with Tom Lien on June 17, 1983 in Bleed, Washington. This interview contains information on family history, childhood, school, emigration, voyage to America, settling in, work, life and homesteading in Montana, Montana environment, playing the violin, military service, marriage and family, work in Washington, changes in Yakima, family life, community activities, differences between America and Norway, and Norwegian heritage. Also available is a black and white photograph of Tom Lien at the time of the interview. The interview was conducted in English.

Box 11, File 9B Photographs
One photograph

Interviewed by Janet Rasmussen
Transcribed by Mary Sue Gee, Julie Peterson and Becky Husby
Encoded by Kerstin Ringdahl & Amity Smetzler
Recording Quality: Mr. Lien is soft spoken and there is some hum on the recording

Tom Lien was born Thor Olsen Lillelien on November 27, 1887 in Lillelien, Vestre Gausdal, Oppland, Norway, which is about 25 kilometers northwest of Lillehammer. His parents were Ole Amundsen Lillelien and Eline Tronson, and Tom had nine brothers and sisters. He attended school until he was confirmed at age fifteen and then worked at home on the farm until he was twenty-one.

In spring 1908, he emigrated with two school friends, and his uncle, John Haugen, met him at a bank in Florence, South Dakota. Tom helped his uncle with building and with field work on John's homestead for the next four to five years. During threshing season, Tom went from farm to farm with the threshing crew, where he ran the steam engine. He moved to Montana and worked as a cowboy on a cattle ranch; his uncle John also moved to Montana and Tom helped him build four school houses in the country.

Tom bought a 300-acre homestead outside of Miles City in southeastern Montana, and he stayed on the farm about five years until the Army drafted him to serve in World War I. He was a private and served on the front in southern Germany for about one year; he was wounded, but not seriously, and returned to his homestead after the war.

He met his wife, Tilda Eiken, in Montana and they married after WWI; his wife was Norwegian but was born in Bismarck, North Dakota, and her parents homesteaded in Montana. Tom and Tilda had two daughters: Harriet Thelma, born on September 13, 1921 in Miles City, Montana; and Elsie Eline, born on May 30, 1924 in Yakima, Washington.

After the war, Tom decided to learn mechanics and apprenticed in a shop, and he worked for a dealer and eventually took over a dealership in Yakima, Washington; he has lived and worked in Yakima since 1923. He has played the violin for Sons of Norway dances but has never joined the organization.