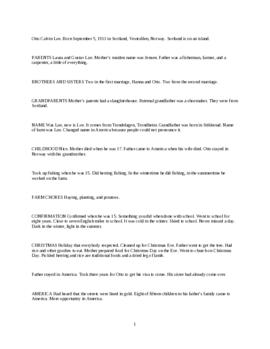 The interview was conducted with Otto Loe on March 24, 1982 in Tacoma, Washington. This interview contains information on family history, childhood, confirmation and school, Christmas traditions, emigration, voyage to America, work in the U.S., learning English, sailing, marriage, working for a printing press, citizenship, children, community involvement, visits to Norway, changes in Norway, and Norwegian heritage. The interview was conducted in English.

Otto Calvin Loe was born on September 5, 1911 in Sortland, Vesterålen, Norway; he was baptized Otto Reidar Koldevin Løe. His parents were Laura Jensen and Gustav Løe. Otto's mother died when he was twelve, and he had two brothers and sisters from his parents and two half-siblings from his father's second marriage. After his mother's death, his father went to the U.S., and Otto stayed in Norway with his grandmother. He went to school for eight years and was confirmed when he was fifteen; he also started fishing herring when he was fifteen. He fished in the winter and helped on the farm in the summer. He left Norway aboard the Stavangerfjord in August 1930 and took the train through Canada to reach Tacoma, WA, where his father met him at Union Station; Otto changed his name from Løe to Loe when he arrived in America. He helped his father at a shoe factory for no pay and started night school right away; he also started going to Sons of Norway. He then worked at a paper, the Western Viking, where he set type and did odd jobs. The company went bankrupt in 1932, and he worked for the new owner for a while before becoming a steward on a Danish sailing ship that went to Hong Kong, Singapore, Manila, and other cities in Asia. He came back to Washington to do printing, but there were no printing jobs, and he worked on a farm for six months. He met his wife, Mabel Josephine Loe, when she was visiting her brother, who was one of Otto's good friends, and they married in 1935. They had three children: Leif Otto, who was born on January 5, 1936; Barbara Irene Miller, born on November 9, 1938; and Roseanne Jeanette Rybolt, born on March 10, 1952; all were born in Tacoma. Otto began working for the paper again, and he and another man bought the paper in 1938; Otto gave the paper to his partner in 1939 and got another job through the milkman. He worked for Miller and Miller Label Company in Tacoma for nineteen years and later started his own printing business. He gained his citizenship in 1940 and is active in Sons of Norway; he is also a member of Nordlandslaget and has taken trips to Norway in 1974, 1977, and 1979.