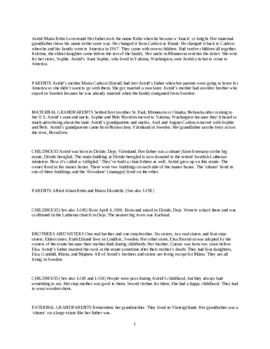 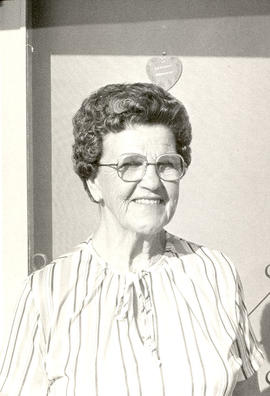 Astrid Maria (Rehn) Lovestrand was born in Dömle, Deje, Värmland, Sweden on April 4, 1906. Her father was the farm foreman on a large estate where he and the rest of the Rehn family resided. Astrid's mother Maria died when she was young and her father remarried the cook on the estate. His new marriage gave Astrid one stepbrother and four stepsisters in addition to her one full brother and two full sisters. After attending school and being confirmed, Astrid moved away from home to work at the age of 14. She found employment as a housekeeper, but Astrid wanted to seek better work in America. Many of Astrid's relatives lived in America and encouraged her to come. After Astrid's father died, her aunt, who lived in Yakima, Washington persuaded her to move there. Astrid was a bit frightened because she did not know her relatives well; nevertheless, in 1930, she decided to leave Sweden for America. With the assistance of her family and of women from the YWCA, Astrid immediately found work as a housekeeper in Yakima. The family she worked for helped her learn English, and Astrid had a pretty good handle on the language after only three months. There was a large Swedish community in Yakima founded by two Swedes who made a great deal of money from gold in Alaska. Astrid's husband was the first resident of the Swedish community. Astrid met her husband, Emil Lovestrand, at the Covenant church they attended. He was fifteen years her senior and a well-established farmer; they married in 1931. Astrid and Emil had eight children-six girls and two boys. They all worked hard on their orchard raising cherries, pears, peaches, apricots, and apples. About 1949, Astrid went to school for training as a practical nurse; she has worked as one since then. Emil passed away in 1967, and Astrid sold their farm to their oldest son. Astrid has traveled back to Sweden four times-in 1954, 1969, 1973, and 1979. She has not participated in any Swedish organizations, but she taught Swedish at a local high school for people in the community in 1980. There is still a fairly large group of Swedish residents in her area.