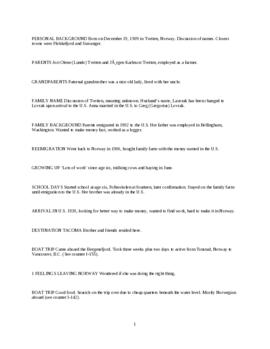 Anna Lovrak was born on December 19, 1909 in Tveiten, Norway. Her parents were Jørgen Karleson Tveiten and Jori Olene Tveiten, and she had three siblings: Carl, Martha, and Gunhild. In 1902, Anna's parents immigrated to America, where her father found work as a logger in Bellingham, WA. In 1906, they returned to Norway and bought the family farm with the money they had earned in Washington. At the age of six, Anna began working on the farm as well as attending school. At fourteen, she attended Folkeskolen and was later confirmed. In 1930, she decided to immigrate to Tacoma, WA, where her brother and friends lived. She stayed with friends from Sirdal, Norway, and her mother and sister arrived a few weeks later. Anna had come to America to make a better living for herself, and once in Tacoma, she was soon hired as a housekeeper by a Presbyterian pastor. Anna met her husband, Greg Lovrak, through her brother. Greg was from Grimstad, Norway and had changed his name from Gregorius Lauvrak to Greg Lovrak upon his arrival to America. Greg was employed as logger when Anna met him, and they had three children: Oscar, Judith, and Glenn. The children spoke only Norwegian until they began attending school, and Anna raised them with Scandinavian foods and customs. Anna has been a member of the Daughters of Norway for 51 years and a member of the Central Baptist Church for 22-23. She has visited Norway and remains in close contact with her relatives there.