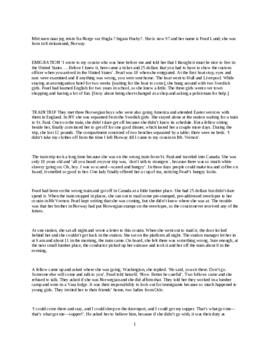 This interview was conducted with Pearl Lund on April 27, 1978 in Stanwood, Washington. It contains information on her family background, work in Norway, emigration, marriage and family life, and the German occupation in Norway during World War II.

Pearl Lund was born on July 1, 1891 in Kristiansund, Norway. There were nine children in her family, but the first four died. Pearl was the second oldest of the remaining five. When Pearl was fourteen, she began waitressing in an old-fashioned kaffe store in Kristiansund. It was the town's nicest restaurant, serving only to people in proper attire and implementing strict rules for the fifteen girls who worked there. When she was eighteen, Pearl decided that she wanted to immigrate to America and contacted a cousin of hers that lived in Mt. Vernon, WA. Her cousin, Inga, promptly sent a ticket and twenty-five dollars. Once she arrived in New York, the train trip to Mt. Vernon took much longer than anticipated. In St. Paul, Pearl boarded the wrong train and ended up traveling through Canada. Leery of strangers, she remained scared and hungry while traveling through Canada. She ended up losing twelve pounds. At one station, two men approached Pearl and told her they were part of a Vasa lodge and were responsible for helping immigrants. The men took her to a house where two Norwegians cooked for her and saw to it that she boarded the correct train the following day. After living in Mt. Vernon for a year, Pearl was ready to return to Norway. She missed her family's customs and did not know Inga's husband's family very well. She soon met Carlsson, a farmer, and was married in 1914. They were married until 1935 when Carlsson died of cancer and had one son, Sherman. In 1948, she married Lund, who lived in Bellingham and had been her neighbor in Norway. That year, she also returned to Norway upon her family's request. Her brother wanted her to come and attend to the business of their apartment house, which had been burnt down by the Germans during the war. Her family had managed to survive the war, but times had been very tough. The Germans had taken over everything, and there was little food other than herring. Lund was charter member in the Sons of Norway, and he and Pearl made several other trips back to Norway under their plan. They also belonged to the Lutheran Church in Bellingham, and Pearl kept up with Norwegian cooking, which she learned after coming to America. At home, her family had always had a hired girl to do the cooking. Around 1963, Pearl's husband was killed on a road job; a logger ran over him. Pearl opted to stay in America rather than returning to Norway since her son was here.