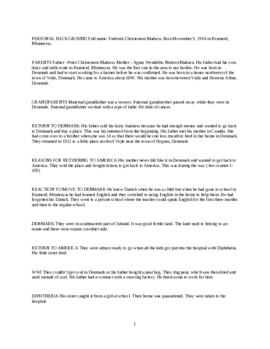 This interview was conducted with Fred Madsen on October 21, 1982 in Enumclaw, Washington. It provides information on family background, emigration to Denmark, Danish folk schools, return to America, occupations, marriage and family, community involvement, and Danish heritage. The interview also includes a letter from Fred, explaining the various organizations he is a part of. The interview was conducted in English.

Fred Madsen was born on November 9, 1904 in Brainerd, Minnesota to Peter Christensen Madsen and Agnes Wendelbo Nielsen Madsen. Both of Fred's parents were born in Denmark, and his father owned a dairy and milk route in Brainerd. When Fred's father had earned enough money to return to Denmark to buy a home in 1912, he moved the family to a little place near the town of Hygum. At this time, there were five children in the family, including Fred, and they attended private school for their first three months in Denmark in order to become better acquainted with the Danish language. Fred's youngest sister, Marie, was born in Denmark. Fred's mother never liked living in Denmark, however, and during WWI, the family bought tickets back to America. Fred and his father returned first in 1922 to see how times were in America. Fred wanted to stay in Denmark, where he had become involved with Danish folk high -schools, but if he would have stayed for a half a year longer, he would have had to register for the Danish draft, and his father did not want that to happen. Fred and his father went to Chicago first, where Fred's aunt and uncle lived. There, Fred quickly became employed on the John Deere estate. After one year, the rest of the family moved to America, and Fred's father bought a farm in New York. Fred then quit his job and moved to New York to live with his family. He worked on the farm, at a creamery, and for the highway department, but in the winter, he, his brother, and a friend went to a folk high school in Nysted, Nebraska. The school was closely related to the Danish Evangelical Lutheran Church, and they did a lot of singing, listened to Danish and American lectures, and studied the American language. Fred also attended folk schools in Tyler, MN and Solvang, CA. In Solvang, he met his wife, Esther Larsen, and was married in 1938. At this time, Fred had been gold mining for a couple of years, and had bought a bulldozer and land in Nevada. He continued to gold mine until WWII, and then moved to western Washington. In Washington, Fred and Esther became the caretakers of Lutherland for several years, helped different church groups get their camps set up, and then Fred began a heavy equipment business called F.C. Madsen and Son. He and Esther have two sons, Peter and Dana. Peter has a degree in chemistry, and Dana, being interested in his father's equipment, earned a degree in engineering and business administration. Fred has returned to Denmark in 1972 and 1980 and is very proud of his Danish heritage. He still attends folk meetings and is a member of the Danish Brotherhood, the Danish American Heritage Society, the Nordic Heritage Museum, the Rebild National Park Society, and Harmonien and serves on the board of directors of the Northwest Danish Home in Seattle.