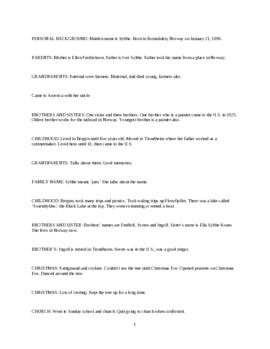 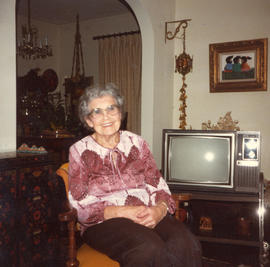 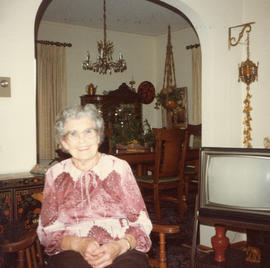 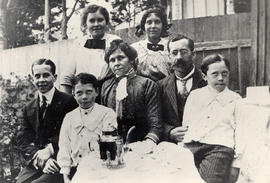 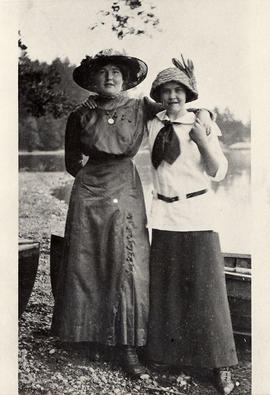 The interview was conducted with Clara Magnussen on September 23, 1981 in Tacoma, Washington. It contains information about family background, emigration, work, marriage and family, community involvement, and Norwegian heritage. The interview also contains: 'The Life of Klara Sylthe Magnussen' by Clara, a family history written by Iver Sivertsen Sylthe, 'My School Days' by Clara, 'When I Was Fifteen' by Clara, an article on Servin Olsen Vaksvik and Anna Pedersdatter's diamond wedding anniversary, an article on the 'All My Somedays' living history project that Clara participated in (1981), and re-creations of Clara's ticket for the White Star Line, baptism certificate, cowpox inoculation certificate, baklandets (backcountry) church book, and her husband Mike's moving out certificate. In addition, several photographs are available, including one of Clara and her family in Norway, one of Clara and a friend in Tacoma, WA (1913), one of Clara and her husband, and two of Clara at the time of the interview. The interview was conducted in English.

Biographical Information Clara Magnussen was born Klara Sylthe on January 21, 1896 in Romsdalen, Norway to Ellen Fredricksen and Iver Sylthe. She had three brothers, Fredleif, Sverre, and Ingolf, and one sister, Ella. Clara lived in Bergen until she was five years old, and then the family moved to Trondheim, where Iver was a cabinetmaker. After Clara was confirmed, she was employed as a hat maker, and in 1912, she decided to immigrate to America. Clara had an uncle, Ivar Lee, whom lived in Parkland, WA and sent her a ticket. When Clara arrived at the Old Milwaukie Depot in Tacoma, WA, she decided to take the streetcar to Parkland herself rather than waiting for her uncle. However, she got on the wrong car and ended up walking all over Parkland in search of her uncle. Luckily, a man in Thompson's Groceries spoke Norwegian and helped her locate her uncle. Other than this mishap, the trip was successful. Clara soon found a housekeeping job in Tacoma at Gravelly Lake, where she lived with the family. Clara later lived with Thorston Olson's family, who worked for Pacific Lutheran University. In 1913, Clara got a job at a coffee shop on Commerce Street, and was then offered a job at another coffee shop by her future husband, Mike Magnussen. Clara first met Mike at a Scandinavian lodge. His parents, who were originally from Norway, returned to Norway after Mike and another sibling were born in Menomine, Michigan. Mike remained in Norway until he was fifteen and a half and then immigrated to America. He was a private chauffeur when Clara met him, and after they were married in 1916, Mike worked for Mrs. R.L. McCormick, Mrs. Fogg for thirteen years, the Perkin's, and the Metcalf's, where he earned $150 a month, for fourteen years. Clara herself did not return to work after marriage. Mike and Clara had three children-Clarence, Roy, and Clifford-and later built a house and owned a shop downtown at the Sanitary Market. They also lived in Mt. View for sixteen years and then moved to Dash Point in the fall of 1956. On March 14, 1957, Mike died of a heart attack, and Clara moved back to Tacoma. She also visited Norway that year and observed a lot of changes in her home country, particularly its modernization. Clara also noted that Tacoma has changed as well, claiming it was busier, nicer, and safer in older days. Clara used to belong to the Daughters of Norway, but now belongs to Circle and the Scandinavian Fraternity. She remains in contact with her brother and sister in Norway and is very proud of her heritage.