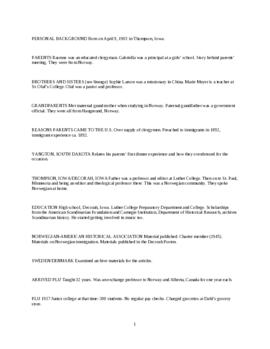 This interview was conducted on April 23, 1980 with Gunnar Malmin. It contains information on family background, education, occupation, marriage and family, community involvement, and Norwegian heritage. The interview also contains a photocopied picture of Gunnar. Also see the Normanna Male Chorus Collection for photos of Gunnar Malmin.

Gunnar Malmin was born on April 9, 1903 in Thompson, Iowa. His parents, Dr. Rasmus Malmin and Gabriella Aas, were both from Haugesund, Norway and came to America because of the over-supply of clergymen in Norway, which was Rasmus's profession. They first went to Yankton, South Dakota, but later moved to Thompson, Iowa/Decorah, Iowa, where Rasmus was a professor and editor at Luther College and Gabriella was the principal at an all girls' school. Gunnar and his siblings-Sophie, Marie, and Olaf-were all born in Thompson.

Gunnar went to high school in Decorah, after which he went to Luther College Preparatory Dept. and College. Gunnar received scholarships from the American Scandinavian Foundation and Carnegie Institution-Department of Historical Research. In 1937, Gunnar began teaching at Pacific Lutheran College, then a junior college. When he began, the school had three hundred students, and no regular paychecks were given to the professors. Gunnar remained at PLU for thirty-two years. Gunnar married Dorothy Brann, and had four children: David, Olaf, Jon, and Anne.

His sons went on to attend PLU, and Anne attended St. Olaf's. In 1945, Gunnar became a charter member of the Norwegian-American Historical Association and had materials published. That same year, he also became the director of the Normanna Male Chorus. Throughout the years, Gunnar has been very active in Scandinavian organizations and church. He is a member of Northlight Club (Nordlandslaget) Nordlyse, and the Sons of Norway as well as being an honorary member of the Daughters of Norway.

Gunnar's church life includes directing church choirs since 1921, Post Chaplain at Fort Lewis, McNeil Island Penitentiary Chapel Choir, Gloria Dei Lutheran Church, and the Norwegian Christmas church services. Gunnar has taken ten trips to Norway, and remains in contact with his relatives there. Gunnar believes his Norwegian heritage is a 'tremendous element in his life' and has received a St. Olaf medal from the King of Norway for his contributions to Norwegian culture.