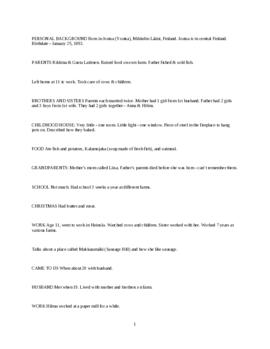 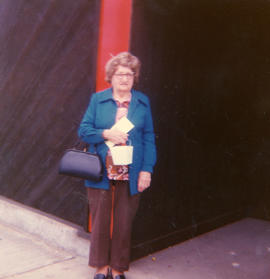 Box 3, File 21B Photographs
One photograph

Hilma Miller was born on January 25, 1893 in Joutsa, Finland, which is located in the central part of the country. Her parents were Gusta and Rikkina Laitinen, and Hilma had one sister, Anna. Gusta also had five other children and Rikkina had another daughter from their previous marriages. Hilma's family did not have a lot of money, and Hilma went to work when she was eleven years old. For seven years, she worked at various farms with her sister.

When Hilma was nineteen, she met her husband and was married. They immigrated to America one week after their wedding, settling first in Virginia, Minnesota. Hilma's husband found work at a sawmill, and they remained there for eight years. During that time, their first daughter, Lila, was born. The family then moved to Lost Lake, North Dakota, where Hilma's husband took care of a farm for three years and their second daughter was born.

In 1922, they moved to Astoria, Oregon, where Hilma's husband had hoped to go fishing but became a longshoreman instead. Hilma, on the other hand, worked as a short order cook, making Finnish food. She also became involved in Peace Lutheran Church and the Finnish Brotherhood. She returned to Finland once in 1960.