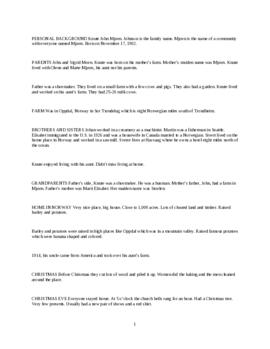 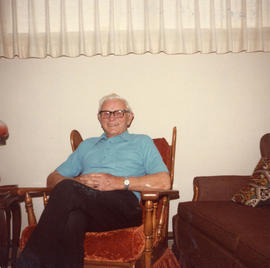 Knute Mjøen was born on November 12, 1902 in Oppdal, Norway to John Moen and Sigrid Mjøen Moen. Since he was born on his mother's farm in the Mjøen community, Knute received the Mjøen name. Knute was the eldest of six children, which included Johan, Martin, Elisabet, Sivert, and Sverre. Knute's father was a shoemaker, and the family lived on a small farm with a few animals and a garden. Knute, however, lived and worked on his aunt's farm. Knute attended school for eight years, including one year of beginning high school, and when he was eighteen years old, he decided to immigrate to America. In February 1921, he traveled to Sioux City, Iowa, where an aunt and uncle of his lived. Knute had minimal language difficulties, having learned some English from his cousins who were raised in Seattle, WA and spoke only English when they visited Knute's family in Norway. Finding a job was not difficult for Knute either. An uncle in Norway had trained him as a painter, and Knute began painting shortly after he arrived in Sioux City. In 1923, Knute moved to Stanwood, WA, where he also had relatives. Jobs were harder to come by here, and Knute lived with an aunt before becoming employed in a shingle mill in Milltown, WA. Knute also had trouble finding employment during the Depression and painted in exchange for food. In 1926, Knute married Gertrude Rise, who was originally from Oppdal, Norway but had been living in central Washington. They had three children: Esther (Hansen), Sylvia (Sill), and John. After Gertrude passed away, Knute was remarried to Violet Larson in 1960. They have been active church members, and Knute has also been active in the Sons of Norway, which he joined in 1921. He has served as their President, Secretary, and Treasurer. Knute has made four return trips to Norway and continues to speak the language.