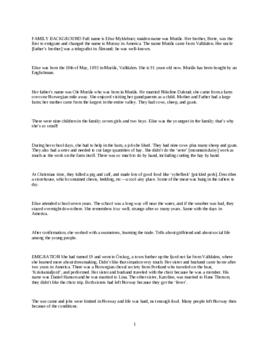 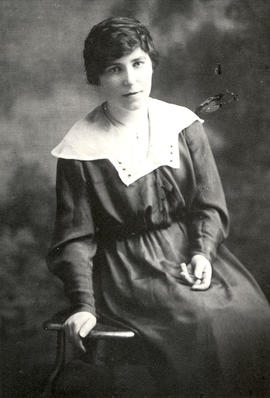 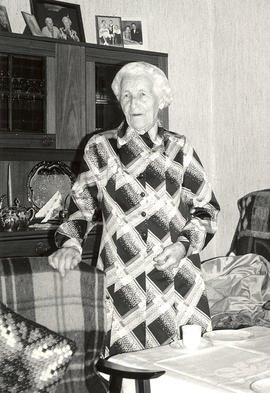 This interview was conducted with Elise Myklebust on June15, 1984 in Myklebust, Gursköy, Norway. It contains information about her family background, emigration, occupation, marriage, and return to Norway. Also available are a photograph of Elise as a young woman and a photograph of Elise at the time of the interview. The interview was conducted in Norwegian.

Elise Myklebust was born on May 18, 1893 in Muriås, Valldalen, Norway. Her parents were Ole Muriås and Nikoline Dalstad, and there were nine children in the family. Elise was the youngest. Elise attended school for seven years and began working as a seamstress after her confirmation. Elise's brother and sister, Karoline, had already immigrated to America, and following a visit from Karoline in 1914, Elise decided to accompany her back to America. They settled in Portland, Oregon, and Elise obtained a job with a wealthy family in the Portland Heights area. She lived with the family and began to learn about American cooking. Wanting to learn more about cooking, she later quit this job and obtained a job with her employer's sister. In her free time, Elise enjoyed getting together with other Norwegian girls at the Sons or Daughters of Norway. In 1917, she met her husband at a youth meeting at a Norwegian Lutheran Church. His name was Oskar Antonson Myklebust, originally from Myklebust, Norway. He immigrated to America when he was sixteen. They were married in September 18, 1918 and remained in America for only one more year because Oskar's family needed him back in Norway. They took over his family's homeplace in Myklebust and had three children: Aasmund, Nellie, and Adled. Elise would have liked to visit America again but never got the opportunity. One American custom she retained was pie making.