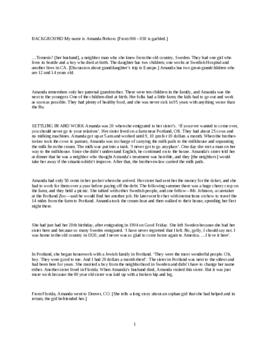 This interview was conducted with Amanda Nelson on June 8, 1978 in Stanwood, Washington. It contains information about personal background, work, emigration, marriage, Swedish traditions, and church.

Amanda Nelson was born on January 5, 1883 in southern Sweden. She was one of ten children who worked on their small farm. After finishing school and working in the fields for several years, Amanda decided to move to America. In 1904, at the age of twenty, she and a friend traveled to the United States. Amanda's sister paid for her trip over, so Amanda worked for her on her farm near Portland, Oregon to pay off the debt. Since the labor was so difficult and Amanda did not like living with her sister and brother-in-law, Amanda found a job as a housekeeper with a Jewish family in Portland. She also traveled and worked in Florida, Colorado, and New York. Through a friend, Amanda met her future husband. He owned a farm in Mt. Vernon and after meeting Amanda, asked her to be the cook on the farm; they married soon thereafter. They had one son who died at birth and one daughter, Evelyn. In 1920, Amanda, with her husband and daughter, returned to Sweden to visit their families. They have practiced Swedish traditions in their family around Christmas time, such as cooking and decorating in the customary way. Amanda has been very active in her Lutheran church, Savior's Lutheran, in Mt. Vernon. She fondly remembers being confirmed in Sweden and since then has loved to volunteer and take charge of church projects. Amanda has become an avid painter and has sold and given away many. Even though she worked so hard all her life, Amanda feels that living in America was good for her and that she has been very fortunate.