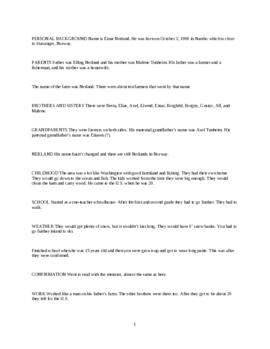 Einar Nerland was born on October 3, 1908 in Nærbo, Norway, which is close to Stavanger. His parents were Elling Nerland and Malene Tunheim, and he had nine siblings: Berta, Elias, Axel, Borghild, Borgny, Alf, Malene, Gustav, and Eivend. Elling was a farmer and fisherman, and after Einar was confirmed at age fifteen, he began working for his father.

When he was twenty, he decided to immigrate to Pierpoint, South Dakota, where his brothers Elias and Axel lived. Pierpoint was a farming community, and Einar initially thought it was the worst place he had seen on his trip over. Einar arrived in February 1929, and when spring came, he was hired at a Swedish man's farm, where he began to learn the English language. He lived on the farm as if he was a family member, and he eventually grew fonder of Pierpoint. He did farm work for five years, and times were especially hard during the Depression. Most farms could not grow crops and dust storms were a frequent occurrence. When the farmers began to lose their jobs to the insurance companies, the companies would then come and fix up the farms for resale. With the help of his brother, Einar managed to obtain a carpentry job.

While living in Pierpoint, he also met his wife, and later had two sons, Dale and James. In hopes of making a better living, Einar and his wife moved from Pierpoint to Milwaukee, WI, where he built houses until the war broke out. At that point, they went to the West Coast, where Einar's wife had a couple of brothers in Tacoma, Washington. In Tacoma, Einar got a welding job at Todd Shipyard, and then went back to carpentry after the war ended. As a carpenter, Einar build primarily homes, but also helped with some of the dorms at Pacific Lutheran University and the University of Puget Sound. He eventually became a member of the Carpenters Union and retired as a carpenter.

Einar continues to remain in contact with his relatives in Norway and has returned to Norway twice. He is a member of the Sons of Norway, but has not been very active, and also attends Bethlehem Lutheran. In regards to the importance of his Norwegian heritage, Einar claims that he is simply a human being, and 'one man is as good as another' regardless of their background.