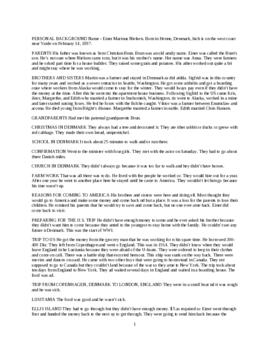 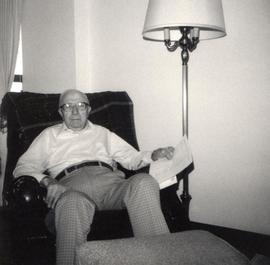 Einer Nielsen was born on February 14, 1897 in Henne, Denmark to Sern Christian Brun and Anna Nielsen. Einer's parents were farmers, raising some grain and potatoes, and Sern also worked part-time for a house-builder. Einer was the youngest of eight children, all of which immigrated to America except the eldest two. After Einer was confirmed, he began working on local farms but did not see a future for himself in Denmark.

In 1914, he decided to immigrate with two other boys who were going to homestead in Canada. They took the Lusitania to Ellis Island and from there, took the train to Toronto, Ontario. In Toronto, they met a man who arranged for them to do farm work in Tavistock, Ontario. Einer farmed until the crops were in and then went to live with his brother in Seattle, Washington. His brother owned a boarding house, and Einer got a room there. He worked shoveling snow and filling bakery orders for the drivers.

Einer's brother Viktor, who was also selling bakery goods, wanted to farm and convinced Einer to join him. They began working on a 1700-acre farm, where they lassoed wild cows, milked them, and made butter. They had four cows, which gave them enough to live on, but soon found a farm more suitable for dairy farming in Roy, Washington. After working with Viktor for awhile, Einer went to Alaska, where his brother Kris had a bunkhouse near a mine. Einer's job was to keep water out of the mine when the tides came in. Eventually, Einer returned to Seattle and went into the milk business with his brother-in-law.

Around 1921, Einer returned to Denmark and brought back Hilda Dungaar, whom he had known from grade school. They were married in Seattle and had two children, Viktor and Esther (Temple). Einer continued with the milk industry and built a Danish brick house for his family. When he retired, he moved into an apartment complex and met his second wife, Helen Bogardis, who was born in Seattle.