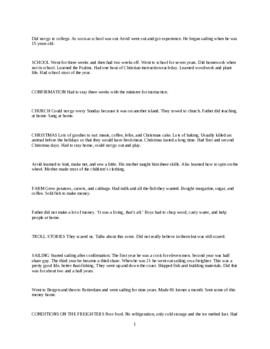 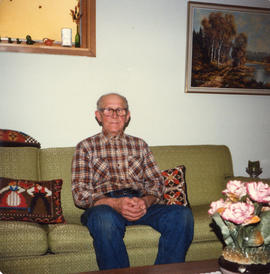 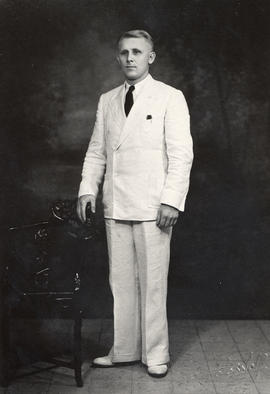 Arvid Nilsen was born on November 24, 1907 in Brasøy, Norway to Martin Kristian Jager Nilsen and Mathilde Mathisen. Arvid's father sold fish to make money and taught his children religious studies at home since they had to row to another island to attend church and could not go every Sunday. Arvid attended school for seven years, and after he was confirmed at the age of fifteen, he began sailing. The first year he sailed, he was a cook for eleven men, but when he was twenty-one, he went out on a freighter, where he was the coal trimmer. The freighter went up and down the coast, shipping fish and building materials, and also made long trips to South America. Arvid was later promoted to sailor and began working on a boat in Belgium, which sailed throughout the Mediterranean. From there, he went to an American oil tanker, which sailed between Antwerp, Belgium and Philadelphia, PA. Arvid stayed on this ship for four and a half years, before changing to a new Norwegian ship, on which he became an engineer after six months and remained for a total of seven years. This boat shipped apples, oranges, and other citrus fruits. During the war, he sailed between Panama and the West Coast of America and worked in refrigeration. In 1943, Arvid married his wife, Esther, whom he had met at a friend's house in Seattle while he was sailing on the coast. They were married in San Pedro, CA at a seaman's church, and Arvid continued sailing for a short time afterward. In 1945, he officially immigrated to the United States and settled down in San Pedro. He continued doing refrigeration work, and worked in Mercury, Nevada for one year on the atomic bomb. His job was to keep the instruments cool. When Nixon came into office, the funding for this job was cut, and Arvid moved to Watsonville, CA, where he worked for the union and got a job mounting steam boilers in the oil field. In 1970, Arvid retired and planned to live in Norway, where he had bought a house. He did not like it, however, and moved after a year and a half. He and Esther then moved to Gig Harbor, WA, where they built a duplex with her cousin, Marie Hageness. There, Arvid became active in the Normanna Choir, Nordlite Club, and the First Assembly Pentecostal Church. Although he was raised Lutheran, Arvid claims that the Lutheran church has too much rituals and not enough spirit, whereas the Pentecostal church allows him much more spiritual freedom.