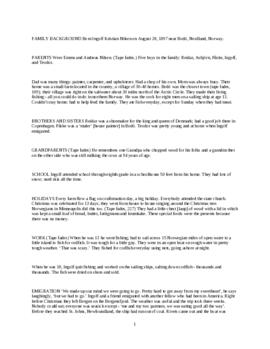 Ingolf Nilsen was born on August 28, 1897 near Bodö, Nordland, Norway in a village thirty miles north of the Arctic Circle and right on the coast. His parents were Andreas and Emma Nilsen, and he had four brothers: Reidar, Asbjörn, Påske, and Teodor. Ingolf began fishing when he was only thirteen years old in order to help the family financially. During this time, he fished for codfish, and when he was eighteen, he began working on the sailing ships, where he salted down the fish. In 1921, Ingolf and a friend decided to immigrate to America. The trip over took three weeks and was rather eventful. By the time they reached Newfoundland, the ship had run out of coal and was leaking. It obtained more coal at St. Johns, Newfoundland and then went on to Ellis Island, New York, where Ingolf boarded a train and continued on to Minnesota. Ingolf remained in Minnesota, working as a house painter, for one - two years before deciding to move to the West Coast with a friend. They joined other friends in Bellingham, Washington and soon became employed at the Pacific American Fishery in Bristol Bay. From there, Ingolf became involved in the Alaskan fishing industry, from which he retired when he was seventy-five. Ingolf met his wife, Bernice Åven at Central Lutheran Church and had two sons: Robert and Gerald. In 1976, Ingolf received free tickets to Norway from the Alaska Company, but went alone because Bernice does not like to fly. He stayed for three weeks and felt like a stranger in his own homeland-everything had changed.