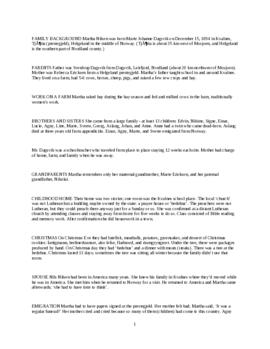 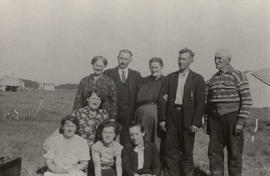 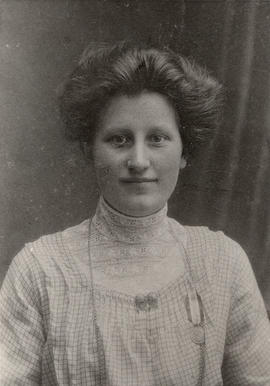 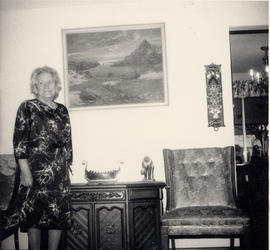 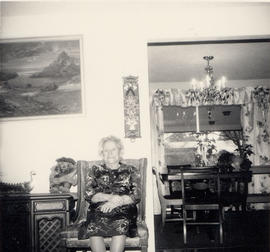 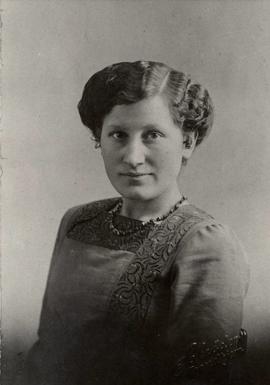 This interview was conducted with Martha Nilsen on March 2, 1983 in Tacoma, Washington. It contains information on her family background, emigration, settling in, return trips to Norway, and Norwegian heritage. Also available are photographs of Martha at ages seventeen and nineteen, Martha and her family during her first visit to Norway, and Martha at the time of the interview. The interview was conducted in English.

Martha Nilsen was born on December 15, 1894 in Kvalnes, Tjoetta, Norway. Her parents were Sverdrup Dagsvik and Rebecca Ericksen, and there were at least thirteen children in the family: Edvin, Nilsine, Signe, Einar, Lucie, Agny, Line, Marte, Sverre, Georg, Aslaug, Johan, and Anne. Anne had a twin who was a stillborn. The family lived on a farm, where they raised a few crops and various animals. Martha's father was a schoolteacher who traveled from place to place, and her mother and the children tended to the farm while he was away. Martha raked hay during the hay season and fed and milked the cows. When Martha was fourteen, she was confirmed and began to work in town. She worked in a cafe and then did housework for various families. Martha met her husband Nils Nilsen when he came to Kvalnes to visit his family. He had been in America for many years, and Martha later immigrated to Tacoma, Washington to marry him. Martha and Nils had two children, Viola and Noble, and Nils was a fisherman, which kept him away from his family often. Martha returned to Norway three times, once in 1937 with Viola, in 1962 with Nils, and in the late 1960s with two of Nilsine's children. In Tacoma, she remained active in the community, belonging to the Ladies Aid at Emmanuel Lutheran Church and the Daughters of Norway. She also continued to make Norwegian foods, including rice mush, broed, morlefse, krinalefse, goro, fattigmann, krumkake, and berlinerkranser.