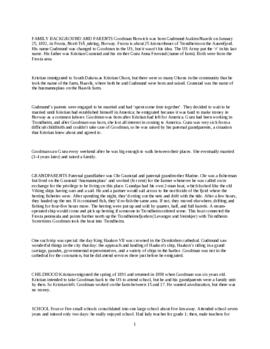 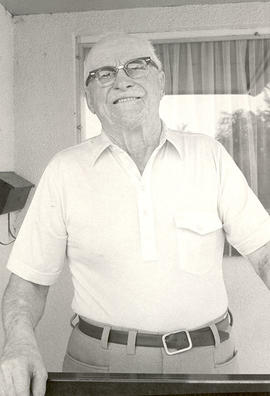 Goodman Norwick was born Gudmund Naavik on January 25, 1892 in Frosta, Nord-Trøndelag, Norway. His parents were Kristian (Olson) Granstad and Gura Anna Froestad, but they were never married. They planned to be married once Kristian established himself in America, but after Goodman was born, Guru lost interest in immigrating to America herself. Both Guru and Kristian eventually married other people and raised families. Due to Guru's sickness after a difficult childbirth, Goodman, however, was raised by his paternal grandparents, Ole and Marine Granstad, and visited his mother every weekend once he was old enough to walk between the two family homes. Ole was a fisherman, but the family lived on a farm where they worked in exchange for rent. As a child, Goodman helped his grandfather with the farm and was also very interested in education. He attended seven years of school, and after his confirmation, he began to work as a hired hand for Mr. Tryggve Juberg. Goodman's grandfather died before his confirmation, and when Goodman's grandmother decided to immigrate to America in 1909 with her son Haakon; Goodman joined them. Once in America, Goodman joined his father in South Dakota, working for him and another farmer, Joe Bryan. Both Joe and his wife were educated at Brookings State College, and Goodman quickly learned English from them and Joe's mother-in-law, Mrs. Buchayne. In the fall of 1917, Goodman enlisted in the Army and served at the Western Front from New Year's 1918 until the war's end. After the war, Goodman returned to the Bryan farm and then went into the masonry-plaster business with his cousin in 1920. This venture only lasted for a year, and in 1921, he began working on a farm with a friend. While working there, he met Anna Mellon, who had also emigrated from Norway, and married her in the fall of 1922. They began farming in Northgate, along the North Dakota-Canadian boarder, and had six children: Lyle, Donald, Arlene, Lillian, Milo, and Lola. While his children were growing up, Goodman held a variety of jobs, including truck driving, working for the Fish and Wildlife Service, construction, and building grain bins. He has belonged to the American Legion since 1920 and continues to read and write in Norwegian.