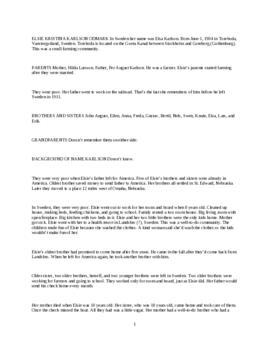 Elsie Odmark, originally Elsa Karlson, was born on June 1, 1904 in Töreboda, Sweden. Elsie's parents, Hilda Larsson and Per August Karlson, farmed in Sweden but were quite poor. In search of better employment, her father moved to America in 1911, and that is the last Elsie remembers of him. At that time, five of Elsie's brothers and sisters already lived in America; there were twelve children in the Carlson family. Since they had so little money, Elsie began working for her room and board when she was only eight years old. Per Karlson sent money to his family back in Sweden, and more of her siblings moved to America. When Elsie was ten years old, her mother died, so an older sister living in the United States returned to Sweden to take care of the family. In 1915, Elsie finally moved to America with some of her siblings. She settled in Nebraska with her mother's cousin and began attending school. Elsie's family rented a farm across the road from the renowned Boys Town, founded by Father Flanagan. Her father assisted the new home for boys by teaching them to farm. Elsie was confirmed in Nebraska, even though her family was not active in the church. Elsie's family began to scatter among different states; Elsie moved with an older sister to Chicago and did housework to earn money. Then she lived for a time with her oldest sister in Muskegon, Michigan. Other members of her family joined them after her sister's husband died of tuberculosis. One sister encouraged Elsie to attend a dance at the Vikings; there she met Adolph Odmark, a 'handsome Swede.' They married in 1928 and soon thereafter took a trip to Sweden to visit relatives for four months. Elsie and Adolph, residing in Muskegon, Michigan, raised four children: Marianne, Raymond, Richard, and Donald. For many years, Elsie worked in the food industry, even establishing her own successful catering business. Around 1970, two of Elsie and Adolph's sons encouraged them to move to Tacoma; they retired just before they made the move out west. Elsie became very involved in the community through Bethel Lutheran Church, Vasa, and the Vasa Friendship Club. She and Adolph visited Sweden two more times before Adolph was diagnosed with cancer and passed away. Although Elsie moved to America at a very young age, she treasures her Swedish heritage and enjoys practicing Swedish traditions.