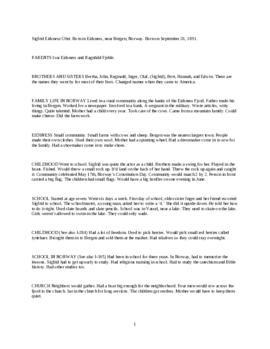 The interview was conducted with Sigfrid Ohrt on July 28, 1983 in Tacoma, Washington. It contains information on family background, emigration, schooling, work, marriage and family, and Norwegian heritage. Also available are 'America, Here We Come,' 'My Father, Ivar Eidsnes,' and 'Growing Up in South Dakota - 1901-05' by Sigfrid Ohrt. The interview was conducted in English.

Sigfrid Ohrt was born on September 26, 1891 in Eidsness, Norway to Ivar Eidsness and Ragnhild Fjelde. She had eight siblings: Bertha, John, Reginald, Inger, Olaf, Bert, Hannah, and Edwin. Sigfrid's father worked for a newspaper in Bergen and was also involved with a bank. When Sigfrid was nine or ten years old, her father got himself into financial trouble and slipped out of the country. Their house was going to be taken away from them, so Sigfrid's mother took her family to South Dakota, where she had three brothers. They arrived in Boston, MA, and were then put on the train to South Dakota. When they stopped in Chicago, a strange bearded man, whom Sigfrid's mother later recognized as her husband, approached them. He was working for a Norwegian newspaper in Chicago and wanted a couple of the children to stay with him. Although Ragnhild was not pleased with the idea, Olaf and Reginald, then eleven and fourteen, respectively, stayed behind. The rest of the family continued on to South Dakota, where Ragnhild kept house for her bachelor brother. Four years later, Sigfrid's father moved to the northern border of North Dakota, and Olaf and Reginald went to Saskatchewan, Canada to claim homesteads along the southern border. Eventually, Sigfrid's father built a house for her mother in Ambrose, ND, and there was not enough money to keep Sigfrid at home. She still had one more year of school and found work in Portal, ND, where she boarded with a family and completed the seventh grade. She was later sent to live on her brother's homestead for a while and then attended the eighth grade in Ambrose, where she stayed with another family and earned room and board. This family moved to Aberdeen, WA and decided to take Sigfrid with them to look after their little girl. In Aberdeen, Sigfrid found a waitressing job and after a year, found a place of her own to live and began to attend a business college. By the time she finished college, Sigfrid had been away from home for four years, and she went to visit her brothers. They had finished their obligations on their land in Saskatchewan and had opened a store and boarding house near Moose Jaw, Saskatchewan. They asked Sigfrid to run their store for them, and when she was twenty-two, she met her husband there. They were married one year later and in 1919, moved to the West Coast. At this time, they had two sons, Daniel and Wallace. They settled in Medford, OR, where Sigfrid's husband opened a welding shop and they had another son, Robert. In 1927, they bought a farm in Rogue River, where their only daughter, Mary Ann, was born eight years later. In 1936, the family moved back to Medford so the boys could have more opportunities, and after the war began, they moved to Bremerton, WA. There, they bought a hotel, which Sigfrid operated. After the war, they moved to Tacoma, WA, where they remained for twenty-two years before living in various other cities in the Pacific Northwest. Sigfrid has not kept in touch with any of her relatives in Norway, but she did visit in 1971.