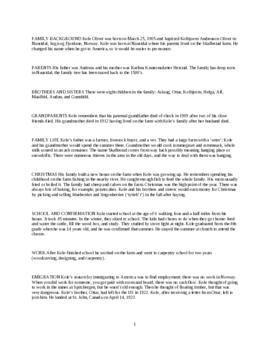 Kole Oliver was born Kolbjørn Andreason Oliver Skaflestad on March 25, 1905 in Naustdal, Norway. His parents were Andreas Skaflestad and Karline Knutsonsdatter Herstad, and there were eight children in the family including Kole: Aslaug, Ottar, Kolbjørn, Helga, Alf, Maalfrid, Audun, and Gunnhild. Kole's father was a farmer, livestock buyer, and veterinarian, and they lived on a large farm. Kole began school when he was six and graduated from the eighth grade when he was fourteen. After graduation, he was confirmed and began working on the farm. He also attended carpentry school, which lasted for two years. In April 1923, Kole decided to immigrate to America, where he hoped to make a better living for himself. Upon arrival to America, he changed his name so it would be easier to pronounce and traveled to Kent, WA, where his aunt and uncle, Klara Ulleland and Abraham Skaflestad, lived. Abraham was a lumber engineer and had a job waiting for Kole when he arrived. Kole lived in a logging camp, where he split wood and loaded carts, making $4 a day. At this time, Klara was pregnant, and she and Abraham decided to leave the camp. Kole stayed there for another month and a half and then moved to Seattle, where he found a construction job. He kept this job for six months and then went back to the woods. In 1927, Kole organized his own taxi cab business in the Tacoma area. He remained in the business for over fifty years, and at its peak, the business had eighty-four employees. In the beginning years of his business, Kole made a lot of trips to Aberdeen, WA, which was where he met his wife, Violet Johnson. Violet was half Swedish-Finn and half Norwegian. They were married in 1931 and had their daughter, Marlene Dawson, the following year. Kole has been quite involved in community activities, including the Sons of Norway, Scottish Rite, and Shrine. He and his family spoke Norwegian at their home everyday and kept up with Norwegian customs to some extent. Kole's hobbies include fishing in Alaska and traveling to Norway. He had returned to Norway 15-16 times.