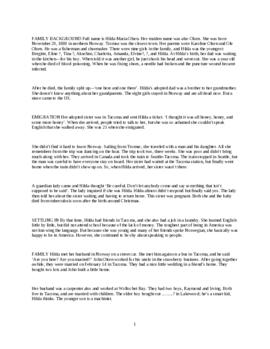 Hilda Olsen was born on November 20, 1888 in northern Norway. The closest city was Tromsø. Her parents were Ole and Karoline Olsen, and Hilda was the youngest of nine girls. Ole was a fisherman and shoemaker and died of blood poisoning one year after Hilda was born. A great uncle then became her adopted father. When Hilda was twenty-one years old, she decided to immigrate to Tacoma, WA, where her adopted sister lived. The only trouble she had with the emigration was not knowing the English language, which she eventually acquired little by little. She made friends with other young Norwegians and obtained a job in a laundry. Hilda originally met her husband, John Olsen, on a streetcar in Norway, but she met him again on a bus in Tacoma. They dated for awhile and were married on February 14 in Tacoma. John worked for his uncle in the strawberry business and was also a carpenter. After their wedding, he and Hilda bought two lots of land, and John built a house for them. They had two sons, Raymond and Irving, and John passed away in 1948. In Tacoma, Hilda has been active in the Daughters of Norway, the Sons of Norway, and Nordlandslaget. She cooked traditional Norwegian dishes in their home and also spoke Norwegian, assuming that the boys would learn English in school. Hilda visited Norway with friends in 1962 but nothing was familiar.