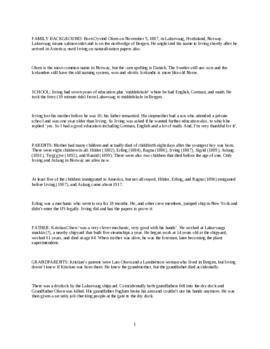 Irving Olsen was born on November 5, 1887 in Laksevaag, Norway. His parents were Kristian Olsen and Georgine Elisabeth Fuglum, and Irving was the fourth of ten children. Two of the younger children died before the age of one, and Georgine died eight days after giving birth to the youngest child, Harold. Irving was ten years old at the time. Irving's father remarried to Kristine Lambertson, who was actually his first cousin. Kristine's son attended a private 'middelskole,' and Irving was given the opportunity to attend there as well. He obtained a good education in German, English, and mathematics.

After finishing school, he worked in a men's clothing store in Bergen and was called upon to help all of the American and German tourists. In 1907, Irving immigrated to Boston, where his older sister Hilder was working as a domestic. Hilder had become acquainted with Soeren Hammer in Bergen and had emigrated with him under the impression that they would be married. The marriage never occurred, but when Irving arrived to Boston, he got a job at Tailby-Mason Pharmaceutical Company where Soeren worked. When Soeren left, Irving took over his job coating tablets, and after several years, was promoted to superintendent of the store.

In 1914, he married Marie Berg (also Norwegian) and had two children, Edith and Harald (Hal). While living in Boston, Irving was very active in Norwegian organizations, belonging to the Good Templar Society, Den Norke Forening, the oldest Norwegian society, and Norumbega. He also took an active part in establishing the Norwegian Old People's Home in Boston and was the chairman when the Home was dedicated.

Irving's Norwegian work in Boston lead to him to being decorated by King Haakon of Norway in July 1939. He received the Order of St. Olaf medal. In 1957, Irving retired from his job at the age of seventy and moved to Seattle. After Marie's death, Irving also married his second wife, Constance, in 1961. Irving had known her as a child in Laksevaag and invited her to come to on a trip to America with his sister, which evolved into a marriage.