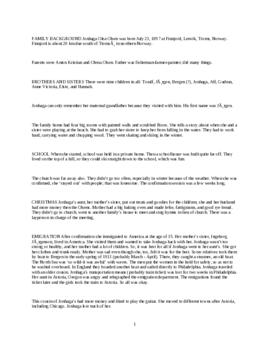 Jonhaga Olsen was born on July 23, 1897 in Finnjord, Troms, Norway. Her parents were Anton Kristian Olsen and Olena Olsen, and she was one of nine children. After her confirmation, Jonhaga immigrated to America when she was fifteen. Her aunt, Ingeborg JÃ¸rgenson, lived in America and decided to take Jonhaga back with her when she came to visit her sister's family in Norway. Ingeborg lived in Astoria, Oregon, and Jonhaga stayed there with her, learning English and helping her aunt with the housework. She also held housework jobs for other families but was very lonesome. She was active in the Sons of Norway, but only because her aunt was also. When a cousin from Minneapolis came to visit, Jonhaga decided to return to her. In Minneapolis, she found a job at a clothing mill and met her future husband, Hans Frederick Olsen. Hans was a typesetter, and his parents had emigrated from the same place in Norway as Jonhaga had. Hans and Jonhaga had four children: Howard, John, Lorraine, and Joanne. Jonhaga never returned to work after she was married, and she and children became active with the choir and Sunday School and Christ Lutheran Church. After spending several years in Minneapolis, the family moved to Sacramento, California due to Jonhaga's asthma. They later moved to Oregon, but when Hans could not find work, they went to Seattle, where he got a job at the Foshay Towers. Jonhaga moved into a Home in 1981.