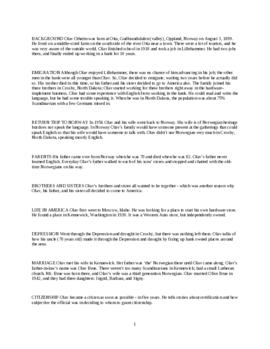 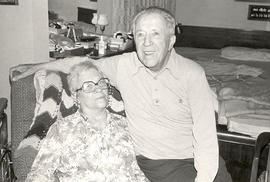 This interview was conducted with Olav Otheim on June 15, 1983 in Kennewick, Washington. It contains information about family background, emigration, employment, marriage and family, community involvement, and Norwegian heritage. Also available is a photograph of Olav and his wife (1983). The interview was conducted in English with some Norwegian towards the end of the interview.

Olav Otheim was born on August 3, 1899 in Otta, Norway to Ole Otbragden and Olea Bergum. He had three brothers, Johannes, Sigurd, and Anton, and one sister, Inga. Olav completed school in 1918 and found a banking job in Lillehammer. He worked at the bank for ten years but as there were no opportunities for advancement, Olav decided to immigrate to America. Olav left Norway on the 'Bergensfjord' in 1928. His mother had passed away by that time, and Olav's father and sister went with him. Olav's brothers were already living in Crosby, North Dakota, where they were working in the hardware-implement business. The family was reunited there, and Olav began working for them immediately. In 1930, Olav moved to Kennewick, Washington, where he began his own hardware store. Twelve years later, he married Olive Brue, who was a third generation Norwegian. They had three daughters: Ingrid, Barbara, and Signy. Through the years, Olav has been active in Kiwanis, the Chamber of Commerce, the Lutheran Church (ALC), and the Sons of Norway. Olav returned to Norway with Olive in 1956 and feels his Norwegian heritage is very important. He and Olive have taught their daughters 'the important things about Norway and being Norwegian,' and Olav's sister has taught them some traditional crafts and foods.