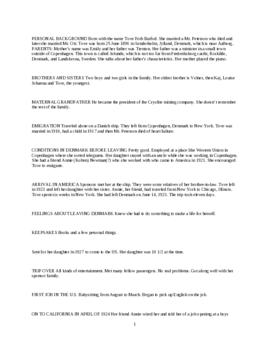 Tove Ott was born on June 25, 1896 in Sønderholm, Jylland, Denmark to Trenton Barfod and Emily Foth. Her father was a minister in a small town called Jølunde, which is located outside of Copenhagen, and Tove had three older siblings: Volner, Kaj, and Louise Johanna. In 1916, Tove married Mr. Peterson and a year later, had her daughter Gertrude. Shortly after Gertrude's birth, Tove's husband died of heart failure. To support herself, Tove worked at an establishment similar to Western Union, sorting telegrams.

At work, Tove became friends with a woman named Annie (Kolten) Newman. Annie immigrated to the United States in 1921 and encouraged Tove to do the same. Tove came two years later, leaving Gertrude with her sister in Denmark. Tove's first job in America was as a babysitter, and in April 1924, Annie informed her of a job opening at a boys' school in Palo Alto, California. Tove got the job and started work immediately. In May, she met her husband, Minet William Ott, and was married in March of 1925. Two years later, Tove sent for Gertrude. Gertrude was ten and a half at the time and learned English quickly.

Tove has not been actively involved in church in the United States but does belong to the Danish Sisterhood in San Francisco, a Senior Citizens group in Burlingame, and a civic group. She has returned to Denmark in 1936 and 1969 and still uses Danish when she writes to her relatives there. Tove is very proud of her heritage.