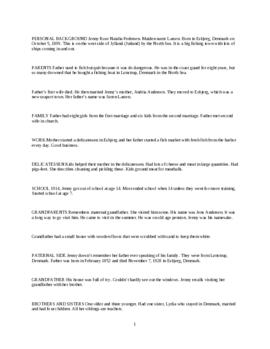 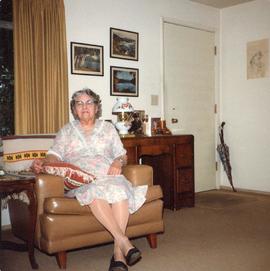 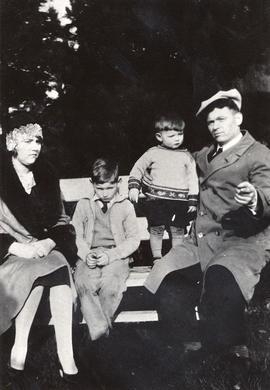 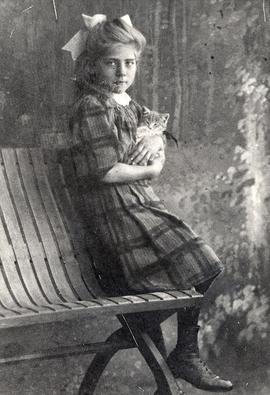 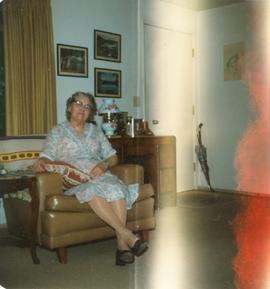 This interview was conducted with Jenny Pedersen on March 2, 1982 in Kirkland, Washington. It contains information on family background, sewing, marriage and family, emigration to Canada and the United States, community involvement, and Danish heritage. The interview also includes a photograph of Jenny at age eight, a photograph of Jenny with her husband and two sons, and two photographs of Jenny at the time of the interview.

Jenny Pedersen was born on October 5, 1899 in Esbjerg, Denmark to Søren and Andria Larsen. Andria was Søren's second wife, and Jenny had eight half-sisters and five full- siblings. Jenny's father was an avid Christian, and all of the children were raised strictly in this philosophy. The family had two very prosperous businesses, Larsen's Delicatessen, which was run by Jenny's mother, and Larsen's Fish Market, which was run by Jenny's father. According to Jenny, she was very close to her family and had a wonderful home life. When Jenny finished school at age fourteen, she got a job sewing buttons on lined dressed and shirts. She did that job for six months and then worked as her parents' errand girl for six months. She was also employed at a factory, where she sewed waistbands on skirts. This job greatly improved Jenny's sewing speed and capability, and when she was sixteen, she began sewing dresses for people. She later went to Copenhagen to learn designing. Knowing a few basic things, Jenny was able to make a variety of designs and fit clothes to the person. Jenny met her husband, Martinus Kristen (Chris) Pedersen, through her half-sister Kathryn Jensen, who lived on Bainbridge Island in Washington. Chris was also from Denmark but went to Australia when he was nineteen and later took a ship to the United States, landing on Bainbridge Island. Kathryn encouraged Chris to return to Denmark and marry Jenny. Chris took her advice and met Jenny in 1921. They were married the following year on June 4 and moved to Vejle, Chris's hometown. In Vejle, they had their first son, Neils. Both Jenny and Chris wanted to move to the United States, but they ended up immigrating to Canada in 1925. They found work at a farm outside of Winnipeg and later at a farm in Vancouver, British Columbia. Eventually, they were able to obtain Visas and moved to Ballard, WA. In Ballard, Chris got a job as a longshoreman, and their second son, Bert, was born. They later moved to Kirkland, where Jenny set up a sewing business out of their home. Through the years, Jenny has maintained Scandinavian traditions and has belonged to the Danish Brotherhood in Seattle. She can still speak Danish and has returned to Denmark once, in 1962.