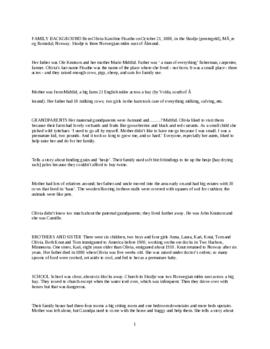 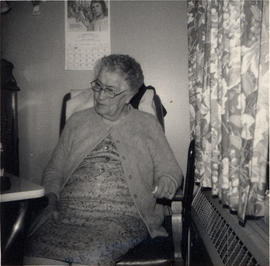 Box 10, File 6B Photographs
One photograph

Olivia Petersen was born on October 21, 1888 in Skodje, Møre og Romsdal, Norway. She was the youngest of six children and was born prematurely, weighing only two pounds. Olivia's father, Ole Knutson Floathe, died when she was young, and her mother, Marie Johanna Midtlid, had to work very hard to support the family. After her confirmation, Olivia's uncle sent her to "handelsskole" (business school) in Orest, which lasted for six months. When she was finished, she began working for her sister, who owned a big restaurant in Ålesund, but did not like it and instead found a job as a bookkeeper for a large bakery.

Olivia worked there for eight years, then decided to immigrate to America in September 1912. At this time, she was engaged to Lars (Louis) Petersen, but he could not join her until several years later. In America, Olivia stayed with her sister, Kari Anderson, in Spokane, Washington. She stayed with Kari for two years, helping her run a rooming house, and then began to work for an elderly Christian Scientist woman, which lasted for two years. Her second job in Spokane was for a family with four school-age girls.

The girls and their German governess helped Olivia with her English, but when World War II broke out, it was discovered that the governess was a spy, and she was sent to San Quentin for twenty years. Olivia then moved to Portland, Oregon, and Louis went to Seattle, Washington with some Norwegian friends to become a fisherman. After the first few years of their marriage, Olivia discovered that Louis was a heavy drinker, which she did not take very kindly to since she came from a family of avid church-goers who never drank. Olivia and Louis had three children: Myrtle, Lawrence, and Paul, and Olivia had to work hard to support her children through the hard times while Louis was out fishing. The Petersens eventually separated due to another woman and a disagreement over a business dealing.

Olivia never returned to Norway nor was she involved in any Scandinavian groups because of her strong Christian faith and objection to "too much of the dancing and hopping around." She also never got very involved with making traditional Norwegian foods since she had begun training as a bookkeeper early on. Olivia moved to Foss Home in 1971.