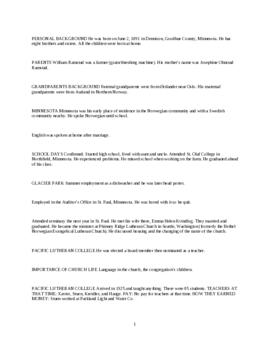 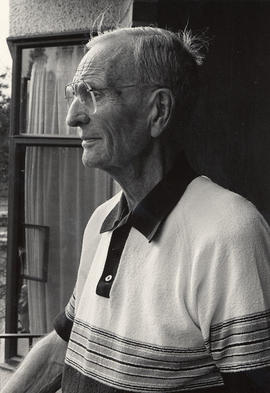 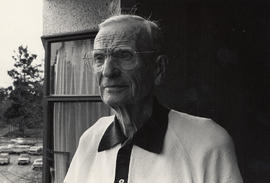 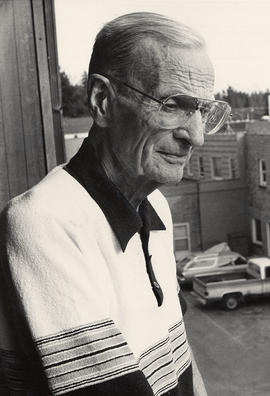 Box 2, File 12A Correspondence and Forms
Release Form
Letters from Janet Rasmussen to Dr. Ramstad and Mrs. Ramstad regarding their participation in the project.
Handwritten Tape Archive Sheet and Family Background

Box 2, File 12B Photographs and Clippings
Three photographs
Biography on Anders Ramstad written by his wife, Emma Ramstad.
Clipping from the Scene in memoriam for Anders Ramstad.

Anders Ramstad was born on June 2, 1891 in Dennison, Minnesota to William and Josephine Ramstad, both of whose parents were from Norway. Anders was one of eleven children, and he spoke Norwegian until he began school. Anders attended St. Olaf College in Northfield, Minnesota, after which he went to seminary in St. Paul. While attending seminary, he met his wife Emma Kvindlog. They have three children: Alice, William, and Helen (Toppy).

After they were married and graduated, Anders became a minister at Phinney Ridge Lutheran Church in Seattle, Washington. He was later elected a board member at Pacific Lutheran College and was eventually nominated as a teacher as well. He began teaching in 1925, and at this time, none of the teachers received regular pay. The faculty did not begin to receive regular pay until President Eastvold came in 1943.

While at PLC, Anders also coached the girls' basketball team and started the first PLC football team. Anders retired from PLC at the age of seventy, after which he arranged for retired PLC workers to use PLC facilities so that he could keep up his hobby of golf. Anders was not a member of the Sons of Norway but was an active member of the Kiwanis Club and attended Trinity Lutheran Church in Tacoma. Anders spoke Norwegian in America 'for fun,' and he visited Norway in 1935 and 1965. Overall, Anders was glad he was Norwegian.