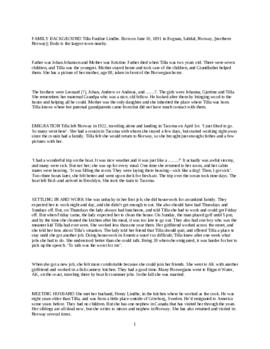 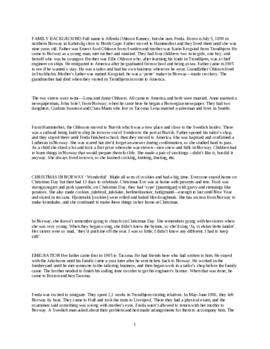 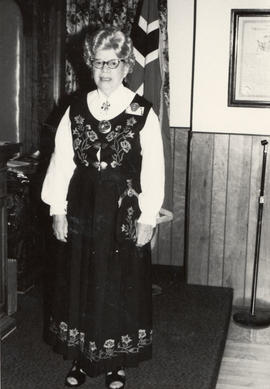 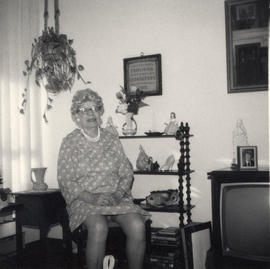 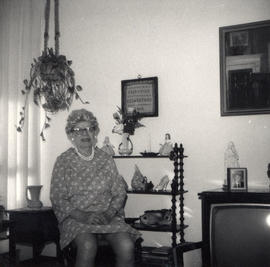 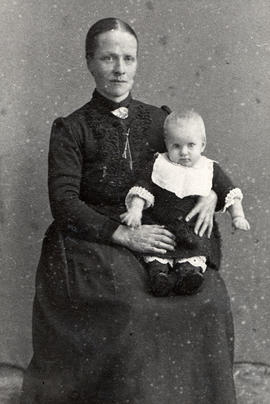 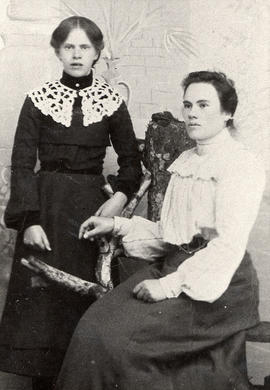 Interviews with Freda Ranney were conducted on April 17, 1979 and November 9, 1982 in Tacoma, Washington. The interviews contain information on family background, emigration, work, marriage, community involvement, and Norwegian heritage. Also available are photographs of Freda as a baby, Freda at age fourteen, Freda in her later years, and Freda at the time of the interview. The interview was conducted in English with some Norwegian towards the end of the interview.

Freda Ranney was born on July 5, 1890 in Kabelvåg, Norway, which is on the Lofoten Islands. Her parents were Ernest Ohlsson and Karin Krogstad, and Freda was one of four children. She had older twin sisters, Anne and Lena, and an older brother, Ellis. When Freda was one year old, the family moved to Hammerfest, where they remained for eight years. After that, they moved to Narvik, which is near the Swedish border. Ernest was a tailor and had his own business wherever he went.

In 1905, Freda's father decided to immigrate to America and settled in Tacoma, Washington. He sent for the girls and their mother a year later. Ellis was attending machinist school at the time and planned to meet the family when he was finished. When Freda and her family arrived in Liverpool, they had to have a doctor's examination, and the doctor told Freda's mother that there was something wrong with her eyes. Freda's mother was sent back to Norway, and the girls continued on without her with the help of a Swedish man. Karin came several months later and was soon after diagnosed with cancer and passed away.

Once in Tacoma, Freda obtained a variety of jobs. She did housework, worked at a laundry, managed a Norwegian rooming house, and worked in a restaurant. When she first got the restaurant job, she made pies, pastries, and custards, but the flour made her sneeze, so she then became a waitress and made sandwiches. Freda met her husband, Daniel Ranney, at this restaurant when she was twenty-six years old. Daniel was from Iowa and was working as a waiter at the restaurant.

They were married at Freda's sister's house and then moved to Seattle, where he did more restaurant work. After Daniel's parents retired, he and Freda moved to Long Beach, California to be closer to them. They remained in California for sixteen years, during which Daniel worked for the Ford Motor Company and Freda was a seamstress at Parker Brothers. She made things such as draperies, slipcovers, and pillows.

After Daniel's parents passed away, they moved back to Tacoma, where Freda worked at Schoenfelds and Daniel owned various restaurants. They bought a house in September 1951, but Daniel had a stroke and passed away in December. Freda remained in the house for the following twenty-seven years and then moved to the Tacoma Lutheran Home. She retired at the age of sixty-five but was then asked to sew slipcovers for Stebners, which she did for another fourteen and a half years.

After Daniel passed away, Freda spent her money travelling to Europe, Japan, China, Australia, and New Zealand. In 1972, she visited Norway. Freda has belonged to the Daughters of Norway since she returned to Tacoma from California and has served as a marshal and trustee. She also belongs to the Scandinavian Fraternity, which raises scholarship money. Through the years, she has also continued to make traditional Norwegian dishes and was surprised at how easily her Norwegian came back to her when she returned to Norway.