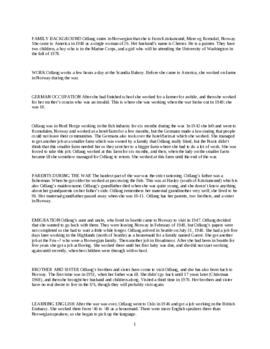 Odlaug Rygmyr was born in 1932 in Norway. She grew up in Kristiansund, Møre og Romsdal, Norway with her family and was one of four children. Odlaug attended school until the seventh grade, but her family did not have enough money for higher education, so she began working on farms at the age of fifteen.

During the beginning of WWII, Odlaug was working in the fish industry in Nord Norge during the winter months, but moved to Romsdalen, Norway in 1942, where she worked at a hotel/farm until the Germans took it over. She then found a job at a small farm, but the Germans did not think she was needed there and sent her to a larger farm where she was forced to do a lot of work. After six months of working there, the lady on the smaller farm managed to have Odlaug work for her again. After the war, Odlaug moved to Oslo and began working at the British Embassy, which helped her become better acquainted with the English language.

In 1948, she decided to immigrate to Seattle, where she had an aunt and uncle, and obtained several jobs working as a housemaid. After five years, she was hired by Boeing and worked there until her first child was due. Odlaug had married a man named Chester, and they had a son and a daughter. She did not go back to work until her children were finished with school, at which time she began working at a bakery.

Odlaug strongly believed in maintaining one's cultural ties, and she and Chester were active members in the Sons of Norway. They were also active in Our Savior's Lutheran Church in Stanwood, Washington, participating in the Sunday school program, Altar Guild, and Women's Circle. Odlaug does not regret coming to America, but does wish she had taught her children more of the Norwegian language.