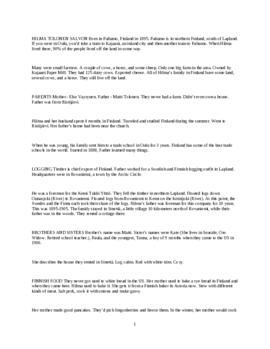 This interview was conducted with Hilma Salvon on July 16, 1981 in Astoria, Oregon. It provides information on family background, emigration, schooling, marriage, and Finnish heritage.

Hilma Salvon was born in 1895 in Paltamo, Finland to Matti Tolonen and Else Vayrynen. Matti was a foreman for a Swedish and Finnish logging company, whose headquarters were in Rovaniemi. The family lived in Sinettä, a small village ten kilometers north of Rovaniemi. Hilma had four siblings: Matti, Kate, Paula, and Tanna. When Hilma was young, Finland belonged to Russia, which was ruled by Czar Nicolas II. All men in Finland were required to serve three years in the Finnish Army, and when Russia demanded that Finland send 10,000 trained men to Russia, a protest and strike occurred. Then, in 1905, the general governor over Finland from Russia was shot, which only increased the confusion in Finland.

In order to escape the chaos, Hilma's father decided to immigrate to America when his cousin in Astoria, Washington sent him a ticket. One year later, he sent for the rest of the family. The family rented a house in Astoria, and Hilma began school. She completed the eighth grade, after which she got a job at a local department store.

While working in the store, Hilma met her husband, Jalver Salvon, who was also from Finland. They were married in 1917 and had two children. Unfortunately, one child died in infancy and other at war in the South Pacific. Both Hilma and Jalver belonged to the Evangelical Congregational Church, and Jalver was also a member of the Finnish Brotherhood.

Hilma enjoys Finnish cooking and tries to keep up with the language. She had returned to Finland once, during which she learned a great deal about the Finnish social security system, medicare system, farming, and school systems. During the trip, Hilma was also impressed with how warmly she and Jalver were received.