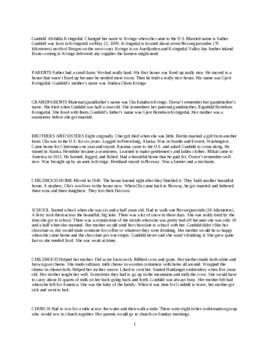 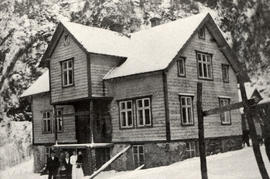 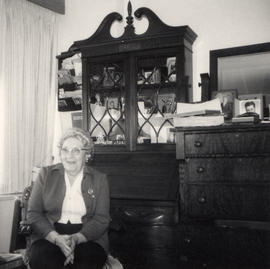 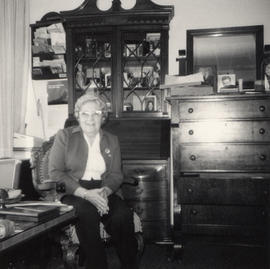 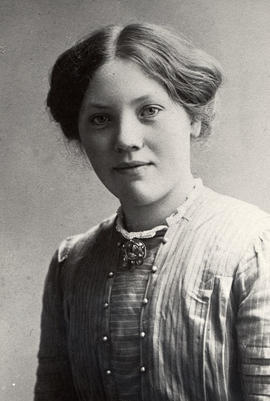 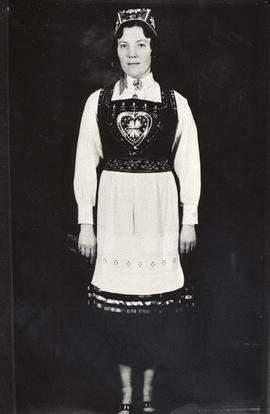 Gunhild Sather was born on May 22, 1899 in Kvingedal, Norway, which is approximately seventy kilometers north of Bergen on the West Coast. Her parents were Gjert Kvingedal and Andrea Olsen Kvinge, and there were eight children in the family. Gjert owned a small farm and built a nice house for the family. Gunhild began school when she was six and half years old and was always busy with farm work in her spare time. After she finished school and was confirmed, at the age of fourteen, Gunhild began working for her brothers in addition to helping her mother around the house. In 1920, her brothers Rasmus and Mikal, who had been living in the United States, came back to Norway, and Rasmus invited Gunhild to return to America with them. Gunhild had wanted to go for a long time and was not getting paid to work for her brothers, so she gladly accepted Rasmus's offer. Gunhild left Norway on May 21, 1921, and it took them nine days to get to New York from Bergen. Upon their arrival, they took the train west, and Mikal got off in South Dakota. Gunhild did not like South Dakota and continued on to Everett, WA with Rasmus. Gunhild then moved to Seattle, where she lived with Berta Peterson, a friend of Rasmus's from Romsdal, Norway. Gunhild soon found a housekeeping job for a Swedish family, but wanted to be paid more and only stayed with them for three months. She then began working for a teacher in Mt. Baker, but the woman never stopped talking, and Gunhild left after one month. Finally, she obtained a good-paying housekeeping job with the Hull family and stayed with them until she got married. Gunhild met her husband, Carl Johan Sather, in 1922 at a dance at the Norway Center. Carl was originally from Aalesund, Norway and was a fisherman. They were married on November 29, 1924 at Immanuel Lutheran Church in Seattle. In 1925, they moved to Ballard, where they lived in a duplex until July. On July 25, they moved into a brand new house and remained there for the following twenty-seven years. Gunhild did not work after she was married, but managed to remain busy while Carl was gone fishing. She has belonged to the Daughters of Norway and Eastern Star and has also helped cook at the Norway Center and at church. Gunhild did not become active in church until her later years when she learned how to drive at the age of fifty-seven. After that, she always filled her car with people who wanted to go to church. Throughout the years, Gunhild has also taken five trips back to Norway.