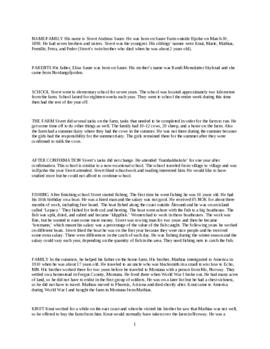 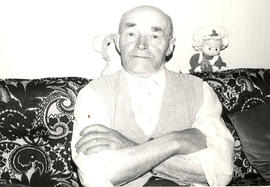 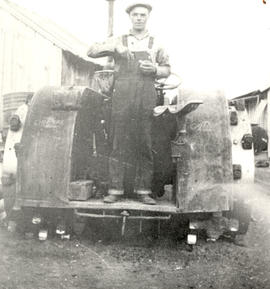 This interview was conducted with Sivert Saure on June 17, 1984 in Bjørke, Norway. It contains information about family background, emigration, work, re-emigration to Norway, and further contact with America. The interview was conducted in Norwegian and is not fully translated. Also available are a photograph of Sivert as a young man and a photograph of Sivert at the time of the interview.

Sivert Saure was born on March 12, 1898 on Saure farm in Bjørke, Møre og Romsdal, Norway. His parents were Elias Knutson and Randi Monsdatter Skylstad, and there were seven children in the family: Marie, Knut, Mathias, Pernille, Petra, Peder (Sivert's twin), and Sivert. When Sivert was sixteen years old, he began working in the fishing industry, and then in 1926, he decided to immigrate to America, where he joined his brothers, Knut and Mathias, in Fergus County, Montana. The brothers later traveled to the west coast, and Sivert became involved with the Alaskan fishing industry. In 1931, he returned to Norway and married Edvarda Saure. Sivert and Edvarda had six children: Einar, Odd, Rolf, Odny, Svein, and Marit. Through the years, Sivert has maintained contact with his brothers and other relatives in America and has visited Montana, Parkland, Washington, and Vancouver, British Columbia.