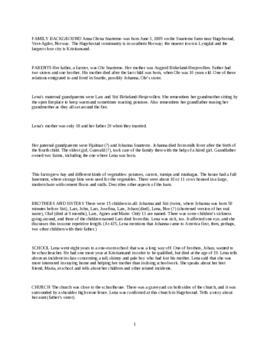 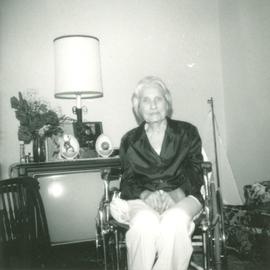 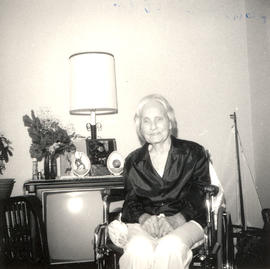 Anna Olena Silver (Lena) was born on June 3, 1889 in Hægebostad, Vest-Agder, Norway. Her parents were Ole Snartemo and Asgjerd Birkeland Hesjevollen, and there were fifteen children in the family: Johanna, Siri, Lars, John, Lars, Josefina, Lars, Johan, Lena, Noe, Lars, Olaf, Agnes, and Marie. (The name of the fifteenth child was not obtained in the interview). The family lived on a farm, but when taxes got high, Lena's father got behind on the payments and decided to go to America to earn extra money. He worked on a farm in Pendleton, Oregon for three years, and when he finally returned home, he convinced the rest of the family to emigrate permanently. They departed on May 23, 1905 and moved into a shanty in Tacoma, Washington, where Lena's father had moved from Oregon. In America, Lena had no trouble finding employment and soon became a mother's helper for various families, which she continued to do until some Norwegian friends convinced her to go to Dawson, Alaska, where she could make a better living. In Dawson, Lena first worked at a laundry and later obtained a job at a bakery-restaurant. While living there, she also met her husband, Conrad Silver, who was born in Joppen, Sweden of a Swedish father and Norwegian mother. Lena and Conrad remained in Dawson until she became pregnant with their first son, Lloyd. They then returned to Tacoma, where they had two more children: Ardell Geraldine and Dexter. In Tacoma, Conrad worked for Brown and Haley, followed by the Shell Company and a large sign company. Conrad had no trouble finding jobs, but did, however, have trouble saving money, and times were financially difficult for the family. Lena took in boarders and patients to earn extra money for her family. Before the children were grown, Conrad went to California and never returned. In 1929, Lena began a nursing home, which she states was the first one in Tacoma.