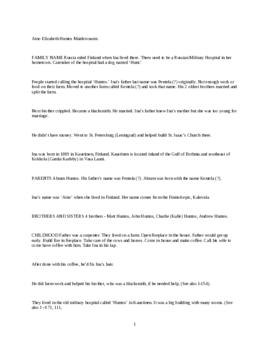 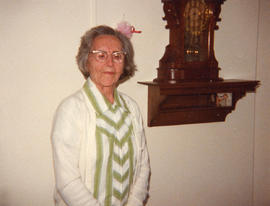 Ina Silverberg was born on February 11, 1889 in Kaustinen, Finland to Abram Huntos and Maja Lisa Puumalla. Abram was a carpenter, and Ina lived on a farm with her parents and four older brothers. The family grew rye, oats, and vegetables and always had plenty to eat. When Ina was eighteen, she decided to visit three of her brothers who were living in Naselle, Washington. Ina ended up staying in America and went to Portland, Oregon, where she hoped she would be able to learn English. She found a housekeeping job with a German family, whose children were also learning how to read, and attended school. When Ina was offered a job that paid thirty dollars more a month, she moved to Astoria, Oregon. In Astoria, she married Leif Erickson, whose mother was Finnish and father was Norwegian. Leif was a logger, and Ina did housework, cooking, and worked at St. Mary's Hospital. Three years after they were married, Ina and Leif had their only child, Ellna. When Elna was twenty years old, Ina married her second husband, Axel Silverberg. Ina's Finnish heritage is very important to her. She belongs to the Finnish Brotherhood and has returned to Finland three times. If she did not have a daughter, grandchildren, and great-grandchildren in America, Ina would move back to Finland permanently.