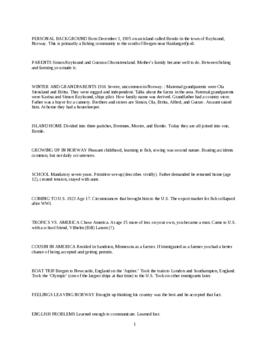 Gustav Simonson was born on December 3, 1905 in Røysund, Norway, which is located on the island of Bømlo to the south of Bergen. His parents were Simon Røyksund and Gustava Olsonstensland, and he had four siblings: Simon, Ola, Britta, and Alfred. Gustav attended school for seven years, and at the age of fifteen, he was basically on his own and began fishing. In 1923, he decided to immigrate to America with his friend Vilhelm (Bill) Larsen. Gustav had a cousin in Sandstone, MN, and Vilhelm settled in Duluth, MN. In Minnesota, Gustav obtained a logging job, was a deck hand on a passenger-fish transport boat, and worked as a harvest hand. He later moved to Tacoma, WA, where he did heavy construction work for eight years. When the Depression set in, Gustav went to Alaska and began fishing again. Eventually, he became the skipper of his own boat, fishing mainly for halibut and cod. Gustav married Jennie Jacobson in 1930 and had seven children: Conrad, Helen, Glenda, Sonja, Jon, Stanley, and Elaine. Gustav never became involved in any Scandinavian organizations, but maintained Norwegian traditions within his own household. His children can speak Norwegian, and the family celebrated Christmas in the traditional Norwegian way, complete with lutefisk, suttapisk, and fattingmand. Gustav's Norwegian heritage means a great deal to him, and he has no resentments toward his emigration provided that the traditions continued to be carried from one generation to the next.