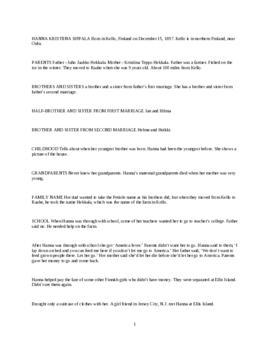 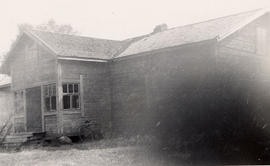 Hanna Sippala was born on December 15, 1897 in Kello, Finland, which is located in northern Finland, near Oulu. Her parents were Juho Jaakko Hekkala and Kristina Teppo Hekkala, and Hanna had a half-brother and half-sister from her father's first marriage as well as a brother and sister from her parents' marriage. When Hanna finished school, she got 'America fever' and convinced her parents to let her go. Hanna traveled to New York and found a housekeeping job with a minister's family. She was paid $10 a month at first but then got a $2 raise every month, as her English improved. Hanna's sister came to America thirteen months after Hanna, and Hanna found another housekeeping job, giving her previous job to her sister. In 1919, Hanna and her sister moved to Astoria, OR, where Hanna's sister's boyfriend lived. In Astoria, Hanna found more housekeeping jobs and met her husband, who was also from Finland. Hanna's husband was a logger but began working as a longshoreman when their daughter, Violet, was born in 1922. From 1929-1931, Hanna and her husband managed boardinghouses, and Hanna also worked in the canneries for twenty years, starting in 1939. Hanna belongs to the Finnish Brotherhood and has made one trip back to Finland. She remains in contact with her relatives there but would never want to move back to Finland herself.