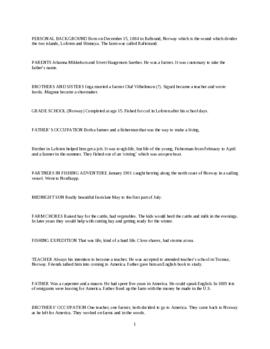 Interviews with Olaf Sivertson were conducted on June 24, 1981 and July 15, 1981 in Tacoma, Washington. The interviews contain information on family background, emigration, employment, marriage and family, and church and community involvement. The interview also contains: a letter of appreciation from Olaf's granddaughter, Sally Morrison, a letter from Olaf, a memorandum concerning the Norwegian texts Olaf donated to PLU, an inventory of the Olaf Sivertson library, a copy of Olaf's family history, and two articles on Olaf writing the area history in his late nineties. The interview was conducted English.

Olaf Sivertson was born on December 15, 1884 in Raftsund, Norway to Sivert Saether and Johanna Mikkelson. Sivert was a farmer and fisherman, and there were four other children in the family: Inga, Sigrid, Magnus, and Marianna. Olaf finished school when he was fifteen years old and then began fishing in Lofoten from February to April and farming during the summer. Olaf intended to become a teacher and was even accepted to attend teachers' school in Tromso, Norway, but his friends convinced him to immigrate to America. Olaf left Norway on May 22, 1902 and settled in Tacoma, WA. Upon his arrival to Tacoma, Olaf first obtained a job a door factory and later began working for a sawmill. After he hurt his back at the sawmill, his friend, Clinton Flowers, helped him get a job as a tallyman (lumber grader), and Olaf went to Calameth, WA. He was later employed at logging camps in Lacey, Castle Rock, and in the Black Hills in Washington. However, after he was injured again, he became employed as a painter and later a cement contractor. Olaf met his wife, Helga Johnson in 1906, and they had seven children: Sigvard, Magda (Lipoma), Arthur, Bernice (Kleinschmidt), Olive (Entenmann), Helen (Forck), and Esther (Haugen). Olaf wanted to raise his family in the country, so he bought ten acres in Mountain View and built a home there. Through the years, Olaf evolved into a jack-of-all-trades. In addition to the timber industry, painting, and cement contracting, he has made traps, dug clams, berry farmed, and owned a chicken farm. Olaf was appointed Road Forman for the district in 1922, County Road Supervisor in 1928, has served on the School Board, and has also been involved in the Water Company and Telephone Company. In addition, he is a member of the Washington Co-Op Agriculture Association, the Washington Berry Growers, and the Mountain View Church. Since his retirement, Olaf has become interested in writing and has written the history of Washington and assembled the church's history. He has never returned to Norway and is also working on his family history.