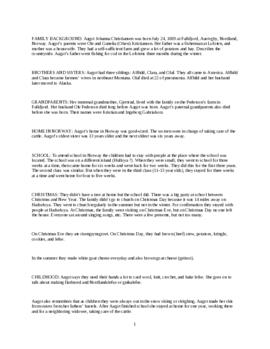 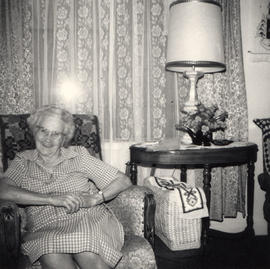 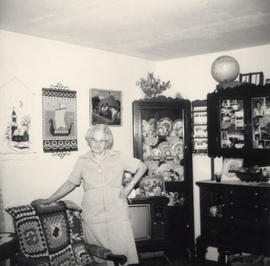 Biographical Information Aagot Solheim was born on July 29, 1889 in Falkfjord, Nordland, Norway. Her parents were Ole Kristiansen and Gunelia Olsen, and she was the third of four children. The family lived on a self-sufficient farm, growing potatoes and hay, and Ole fished for cod in the Lofotens during the winter. Aagot had an active childhood, which involved helping take care of the cattle and activities such as knitting, crocheting, baking, skiing, and sleighing. Aagot's sisters, Alfhild and Clara, left Norway for America in 1911 and 1913, respectively, and Aagot decided to emigrate as well in 1916. Aagot was only seventeen at the time and went to Dooley, MT, where her sisters and their families were living. In Dooley, Aagot began working for farms and soon met her husband Kristoffer Solheim. Kristoffer was from Tysnesoy, Norway and had immigrated to Albert Lea, MN when he was sixteen. Aagot had only been living in America for one year when they married in November 1917, and they had four children: Myrtle, Gladys, Caroline, and Agnes. In 1934, they moved to Sand Point, ID, where Kristoffer worked in the forest, and then moved to Tacoma, WA in 1942. In Tacoma, Aagot worked as a plumber in the shipyards, and Kristoffer had various jobs as a laborer. They were not active in church in Tacoma, but Aagot was a member of the Daughters of Norway. Kristoffer died of cancer in 1967, and they never had the opportunity to return to Norway.