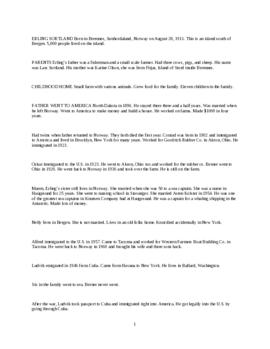 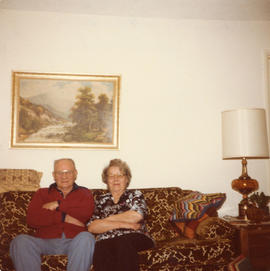 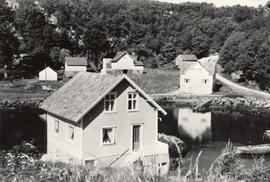 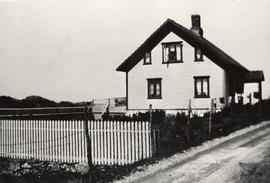 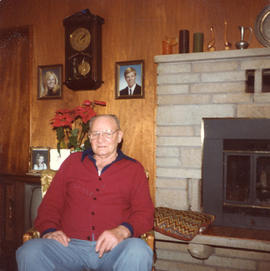 This interview was conducted with Erling Sortland on January 12, 1982 in Tacoma, Washington. It contains information on family background, occupations, enlistment in the US Army, marriage and family, and Norwegian heritage. It also provides an article from the Western Viking, which includes a picture of Erling, and photographs of Erling and his wife Svanhild at the time of the interview. Also see Svanhild Sortland. The interview was conducted in English.

Erling Sortland was born on August 28, 1911 in Bremnes, Sønhordaland, Norway, which is an island south of Bergen. His parents were Lars and Karine Sortland, and there were eleven children in the family. Lars was a fisherman, and the family lived on a small farm where they produced all of their own food. Erling began school in 1918 and continued until 1926. He was confirmed on September 5, 1926, after which he went herring fishing for several years. Erling wanted to immigrate to America but did not have enough money, so he began working for Knutsen Ship Company in Haugesund in 1931. Knutsen Ship Company was the biggest private company in Norway at the time, and Erling was hired as an engine boy. He made 33 krone a month ($5.70) and traveled throughout the world. In 1938, Erling returned to Norway for six weeks and became engaged to Svanhild Knutsen. They were married July 15, 1939, and Erling built a house for her in Norway before he went out sailing again. When the war broke out, Erling was put on a tanker with the world's largest gasoline tank and went to Texas, New York, Spain, and Beirut. Later in the war, a German plane dropped a bomb on Erling's ship, and a German submarine also chased them. In 1942, Erling went to New York and enlisted in the Army. On January 15, 1943, Erling was put on the Queen Elizabeth. There were 18,500 soldiers on the ship, and they went to Glasgow, Scotland. Erling then spent three years on the a base in England, where he worked as a mechanic. After he had spent four months in the Army, he took out US citizenship. For this, all he had to do was renounce his Norwegian citizenship. After the war, Erling went back to New York, and Svanhild got to come over as a war bride. On April 30, 1947, his son Egil was born. They rented a flat in Brooklyn, and Erling fished until 1948. The family then went to Ohio and bought a small farm. Erling found a mechanic job building crane trucks and worked there for sixteen years. On March 13, 1953, his daughter Evelyn was born. By this time, Erling was tired of living in Ohio, and they went to Norway for two months. In Norway, however, Erling observed many changes and was not interested in living there either. Erling had a brother in Seattle, Washington and decided to move to the West Coast of the United States also. In Tacoma, Erling found a job rebuilding engines and then got a license as a diesel engineer. In 1958, he got a job at Puget Sound Hospital and stayed there until 1966. He then obtained employment at Reichold Chemical Company and remained there until retirement. In Tacoma, Erling has been active at Christ the King Lutheran church and involved in the Sons of Norway. His family has returned to Norway to visit relatives and friends, and both of his children can speak the language. Erling is very proud of his Norwegian heritage.