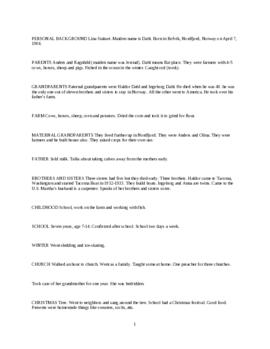 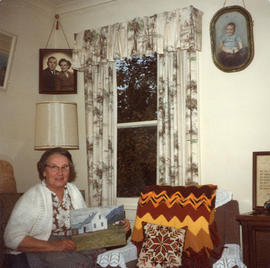 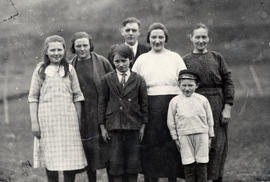 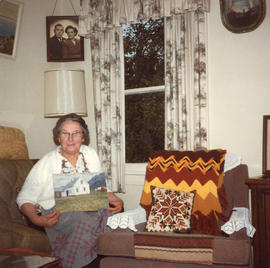 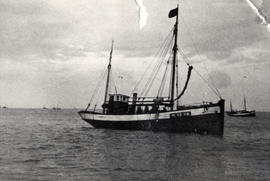 Lina Stakset was born on April 7, 1904 in Refvik, Nordfjord, Norway. Her parents were Anders and Ragnhild Dahl, and there were seven other children in the family: Haldor, Anna (Strom), Ingeborg (Trongedahl), Dina, Martha (Kvamme), Anders, and Alf. Lina's parents were farmers, and the family lived on a farm with cows, horses, sheep, and pigs. Lina attended school from the age of seven to fourteen and was then confirmed. After confirmation, Lina began to do housework for her aunt and uncle and then worked in a hotel in Måløy for several years. Lina's uncle, who lived in the United States, encouraged her whole family to emigrate, and Lina left Norway in October 1928. The trip took nine days, and Lina got very seasick. Upon arrival, she and friend took the train to Seattle, WA. Lina had friends in Seabeck, WA. Lina's first job in Seattle was to care for sickly babies. She met her husband, Henry Stakset, at a friend's wedding. Henry was from Gjerdsvika, Norway and was a fisherman. They were married by a preacher in Vancouver, WA and settled in Seattle. They later moved to Tacoma, WA. Lina and Henry had three children: Christy (Jacobsen), Allen, and Henry. All of the children learned Norwegian at home, and Lina continued to cook traditional Norwegian foods. She has been active in Ole Hanson's church and meets with a Norwegian organization once a month at Gloria Dei Church. Lina has also returned to Norway six times, and her Norwegian heritage means a lot to her.