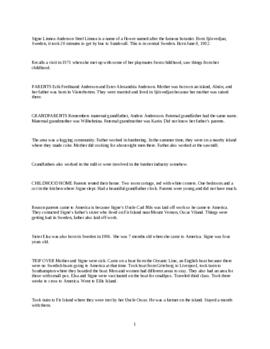 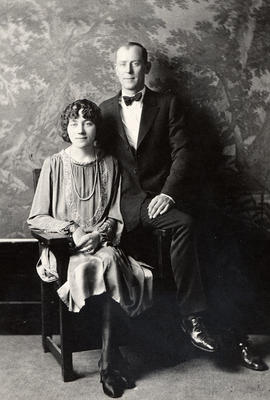 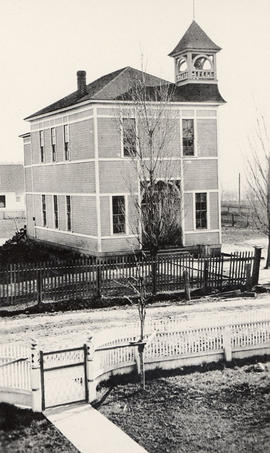 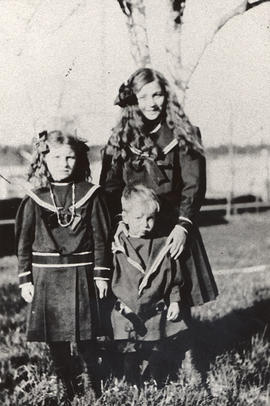 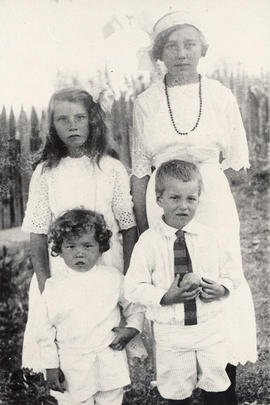 Signe Linnea Steel, originally Signe Linnea Anderson, was born on June 8, 1902 in Sjösvedjan, Sweden. Signe's father, Erik Ferdinand Anderson, worked in lumber, and her mother, Ester Alexandria Anderson, did some cooking for the workers. The Anderson family lived in a small cottage. For a short time, they lived in Norway before deciding to move to America in 1906. Signe's sister Elsa was born shortly before the move, and her brothers Fred and Harry were born after they had settled in America. The Anderson's met Uncle Oscar on Fir Island near Mt. Vernon, Washington. Signe's father found a job at a mill in Cedarhome, Washington. In 1913, Signe's father died in a horse accident, and her mother died four years later from heart and kidney complications. Signe had to quit school to take care of the farm and her siblings. Relatives and friends helped the orphaned Anderson's as much as they could, but Signe also selflessly reached out to others who had no place to go. At the age of 15, Signe left Cedarhome for a good housekeeping job in Seattle. She was reluctant to go, but her sister Elsa was old enough to be responsible. For three years, Signe worked as a housekeeper for two successful families in Seattle. Signe joined the Order of Vasa in 1920 and then became involved in the Swedish Club. Through friends, Signe met her husband, Jack Steel, and they married in 1923. The two of them lived in Seattle; they never had children, but Signe's younger brothers lived with them for a while. Jack worked as a foreman for a painting firm; he even did some contracting on his own. Signe and Jack lived in Seattle in a few small homes, one of which they lost during the Depression. Jack died in 1961. Signe has become quite active in the community, especially in the Swedish Foundation where she interviews people who need money. She visits nursing homes and produces musical programs in her area. Signe returned to Sweden in 1971 to visit friends and relatives. She continues to practice some Swedish traditions, such as placing branches of fir by the front door at Christmas time.