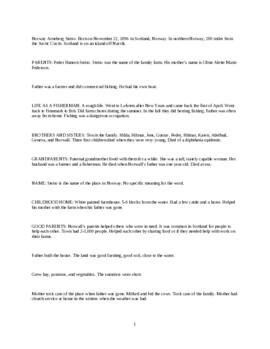 This interview was conducted with Norwall Steiro on December 16, 1981 in Tacoma, Washington. It contains information about family background, emigration, occupations, marriage and family, church and community involvement, and Norwegian heritage. The interview also provides a program from the dedication of Lutheran Minor Hospital, a newspaper clipping on the altar Norwall built for Lutheran Minor Hospital, an article on the construction of Bethlehem Lutheran Church in Tacoma, a letter regarding the accomplishments of Norwall, a paper entitled 'Norwall Arneberg Steiro, a Builder' (November 22, 1981), a program from Lutheran Social Services' Third Annual Appreciation Dinner (October 9, 1981), Norwall's certificate from sailing school, and a poem written to Norwall on his eighth birthday. The interview was conducted in English.

Biographical Information Norwall Steiro was born on November 22, 1896 in Sortland, Norway, which is located in northern Norway, 200 miles from the Arctic Circle. His parents were Peder and Oline Steiro, and there were ten children in the family. The first three children died from the diphtheria epidemic when they were young, and two girls in the family were not blood-related. One girl was an orphan and the other was from a poor family. The people in Norwall's community helped each other as much as possible. Norwall's father was a farmer and commercial fisherman and was often away from home. While their father was out fishing, Norwall and the other children helped their mother with the farm. Norwall attended school through the eighth grade and then worked in a machine shop for a year. After the machine shop, he worked on a fishing steamer, where he was the fireman and engineer. When World War I broke out, Norwall was called into the service and was on the border patrol between Sweden and Norway for one year. After the war, he became a commercial fisherman. In 1922, he married Petra Pederson, who was his sister-in-law's sister. In April 1923, Norwall's brother Peder, who had been living in America for fifteen years, wrote to Norwall's father and suggested that Norwall come to America. Prior to this letter, Norwall had never considered emigrating, but he discussed it with his wife and family and decided to go in June. Norwall felt that he would have better opportunities in America. It took 7-8 days for Norwall to get from Bergen to New York, and from there, he took the train to Tacoma, WA. The language difference posed a big problem for Norwall at first, but he began taking night school shortly after he arrived in Tacoma. Norwall's first job in Tacoma was building a school, and after a few months of work, he had enough money to buy two lots of land. On August 8, 1925, his first daughter, Orna Kristine was born, and his second daughter, Doris Pauline (Hanson), was born two years later on the fifteenth of December. That same year, Norwall completed a house for his family on the land he had bought. Until the late 1930s, Norwall worked for his brother's building company Steiro-Hanson and then started the Steiro Company on his own. After World War II, Norwall had difficulty getting materials and went back to work for his brother. Through the years, Norwall has helped to build Christ the King Church, Trinity Lutheran Church, Good Samaritan Hospital, Zion Lutheran, and Lutheran Memorial. Norwall himself has been very active in Church life at Bethlehem Lutheran, where he has served as Treasurer, Deacon, President of the Congregation, and been on the Board of Trustees. He was also the President of Lutheran Welfare for eighteen years. Norwall met his second wife, Mathilda Boe, at church. She was born in Wisconsin and came to Tacoma as a parish worker. In addition to church, Norwall was a member of the Sons of Norway but was not very active. He has returned to Norway twice and still remains in contact with his relatives there.