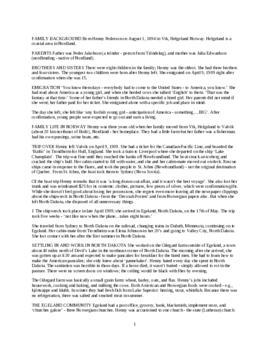 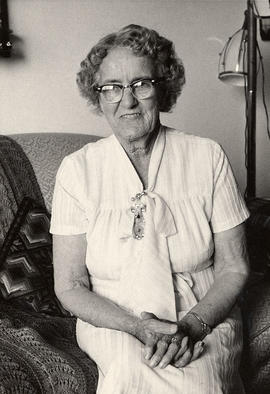 Henny Storwick was born Henny Pederson on August 1, 1884 in Vik, Helgeland, Norway, which is a coastal area in Nordland, and moved to Valvik, Nordland when she was three. Her parents were Peder Jakobson and Julia Edwardson, and there were eight children in the family, of which Henny was the oldest. Henny decided to immigrate alone to America on April 9, 1909, when she was only fifteen years old. The trip took five weeks, and Henny encountered various problems throughout the voyage. Off the banks of Newfoundland, the ship struck an iceberg, cracking its hull, and upon arrival in St. Johns Newfoundland, it was discovered that Henny's trunk had been lost. She was reimbursed $25. From St. Johns, Henny took a boat to Sydney, Nova Scotia, where she took the train to Egeland, ND. There, Henny worked for the Odegard farm, which entailed housework, cooking, baking, and milking the cows. According to Henny, she 'hated everyday she spent in North Dakota.' Three years after her arrival, Henny married a man named Sovick and stayed with him for seven years. In 1919, she took their children, two sons and a daughter, and moved to Tacoma, WA, where she had friends from North Dakota. Soon after the move, she was employed as a seamstress at Durie's Tailor Shop, where she worked for nine years until she obtained a job at Peterson and Davis Tailor Shop, which paid better. During World War II, she transferred to the McChord Field PX. In 1924, Henny married Ingvald Storwick, an Alaskan fisherman, and moved from South Tacoma to a bigger house on 72nd and Yakima. In Tacoma, Henny was very active in church and Norwegian organizations. She attended Our Saviour's Lutheran Church for forty years, where she served on the Board of Trustees and was administratively active in ALCW. She also took part in Nordlandslaget, Daughters of Norway, and Rebecca. She was elected the first female president of Tacoma's Nordlandslaget and served as president and secretary of the Daughters of Norway's Embla Lodge. Henny has returned to Norway nine times and continues to maintain her Norwegian traditions and language.