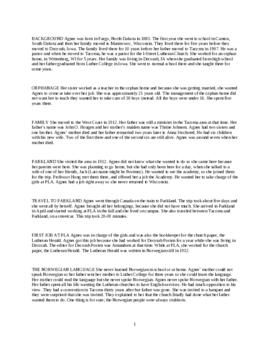 Interviews were conducted with Agnes Stuen on July 2, 1979 in Seattle, Washington and on May 6, 1980 in Tacoma, Washington. The interviews contain information on her family background, employment history, and the early days at Pacific Lutheran University, marriage and family, and Stuen Hall. The interview was conducted in English. John Stuen also contributed to the May 6, 1980 interview.

Agnes Stuen was born on November 26, 1883 in Fargo, North Dakota. Her parents were Johan Hougen, who was originally from Norway, and Thrine Johnson, who was born in Clinton County, Iowa. Agnes's maternal grandmother was an orphan and raised in Norway, but Agnes does not know what country her great grandparents were originally from. In addition to Agnes, Johan and Thrine had four other children: Clara, Laura, Hjalmar, and Alfred. After Thrine died of tuberculosis when Agnes was seven years old, the family remained in Fargo, where Johan was a minister, for two more years. The family then moved to Canton, ND, where Johan remarried. Eventually, the family moved to Decorah, IA, where Agnes finished high school before continuing on to St. Olafs College. Following college, Agnes became a teacher at a children's home, and 1912, she moved to Tacoma, WA, where her father now lived. In Tacoma, she was hired as the Dean of Woman at Pacific Lutheran University, then Pacific Lutheran College. Agnes lived at the school, where she taught English and spelling to foreign students, in addition to looking after 50-70 girls. In 1914, she married Ole Stuen, who taught German, Physics, Norwegian, and worked in the library at PLU. Ole was born in Oppdal, Norway and had come to the United States to further his education. He graduated from PLU and also attended the University of Washington. Agnes and Ole had four children: John, Elizabeth (Willis), Marc, and Anita (Potthoff). All four of the children attended PLU, as have all four of Elizabeth's children, two of John's children, and all four of Marc's. A dormitory at the university was also dedicated to the Stuens after they gave six lots of land to PLU. Stuen Hall currently stands where their house was once located.