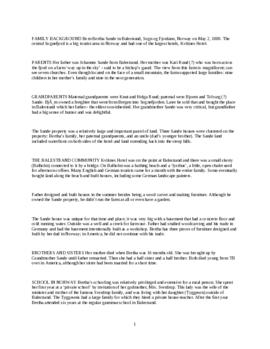 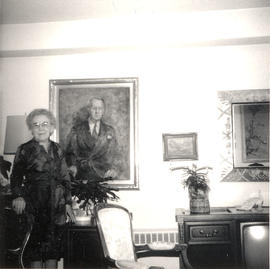 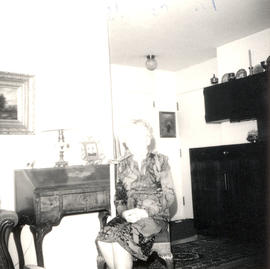 Box 11, File 1B Photographs
One photograph

Bertha Sylliaasen was born Bertha Sande in Balestrand, Sogn og Fjordane, Norway on May 2, 1888. Her parents were Johannes Sande and Kari Ruud. Johannes was a woodcarver, who designed and built houses in the summers and made furniture during the remainder of the year, and Kari passed away when Bertha was only sixteen months old. The Sandes were a prominent family in Balestrand, and Bertha had a relatively privileged education for a rural person. After grammar school, she attended two years of high school and then 'middelskole' in Nordfjordeid, where she studied English among other things.

While Bertha was attending 'middelskole,' her father requested that she come home because the family was going to immigrate to America. By this time, Johannes had remarried and had two more children. Bertha had no desire to immigrate, but her stepmother, Britta, had convinced her father to do it, and he insisted that Bertha come as well. The family immigrated to Bellingham, Washington, where Britta's brothers lived, and Bertha initially hated it. Soon after their arrival, Bertha was told that she should go out and earn a living of her own, which troubled her at first since her family had always had a maid and she had no domestic experience. Fortunately, she found a job as a domestic helper for the family of a very nice local dentist. She worked there for two-three years until she saw an ad for a second maid in Seattle, which offered a better salary. Bertha was hired for the job, which entailed helping the first maid and no cooking, which, still lacking any cooking skills, Bertha was happy about. Her next job was as a housekeeper-companion for a German woman.

In Seattle, Bertha also began attending church, and met her husband who was part of the church choir. He was studying to become a civil engineer at the University of Washington and came from a very prominent family in Seattle. The Sylliaasens had one child, Jane, and continued to live in the Seattle area. Bertha's husband sang for the Seattle Normanna Chorus, and Bertha joined the women's group who supported them. However, Bertha never took part in any Scandinavian organizations despite the fact that she was asked to organize a Daughters of Norway lodge in both Bellingham and Seattle.